An expression of aloha for our dear Aunty Pat who left on the path of no return on January 23, 2021, at the age of 100. Within her lived the legacies of those committed to preserving the invaluable knowledge of the past. Her own dedication to this noble calling came with a life devoted to the perpetuation of Hawaiian language, hula, mele, and cultural knowledge. 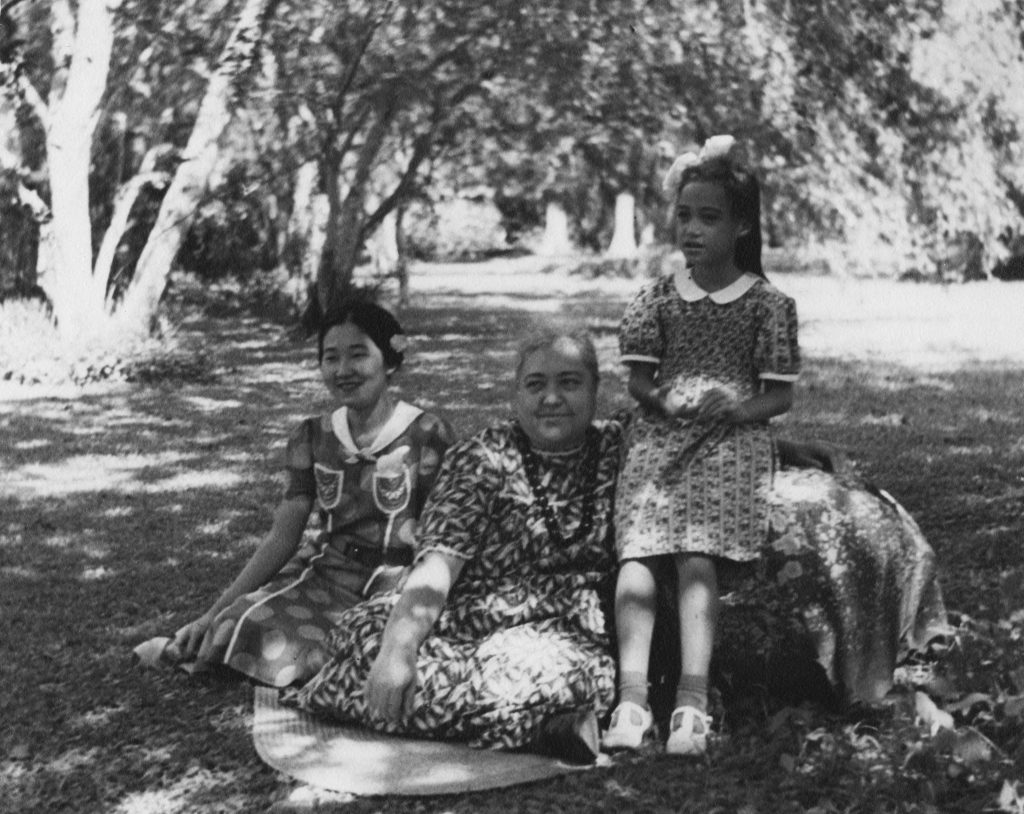 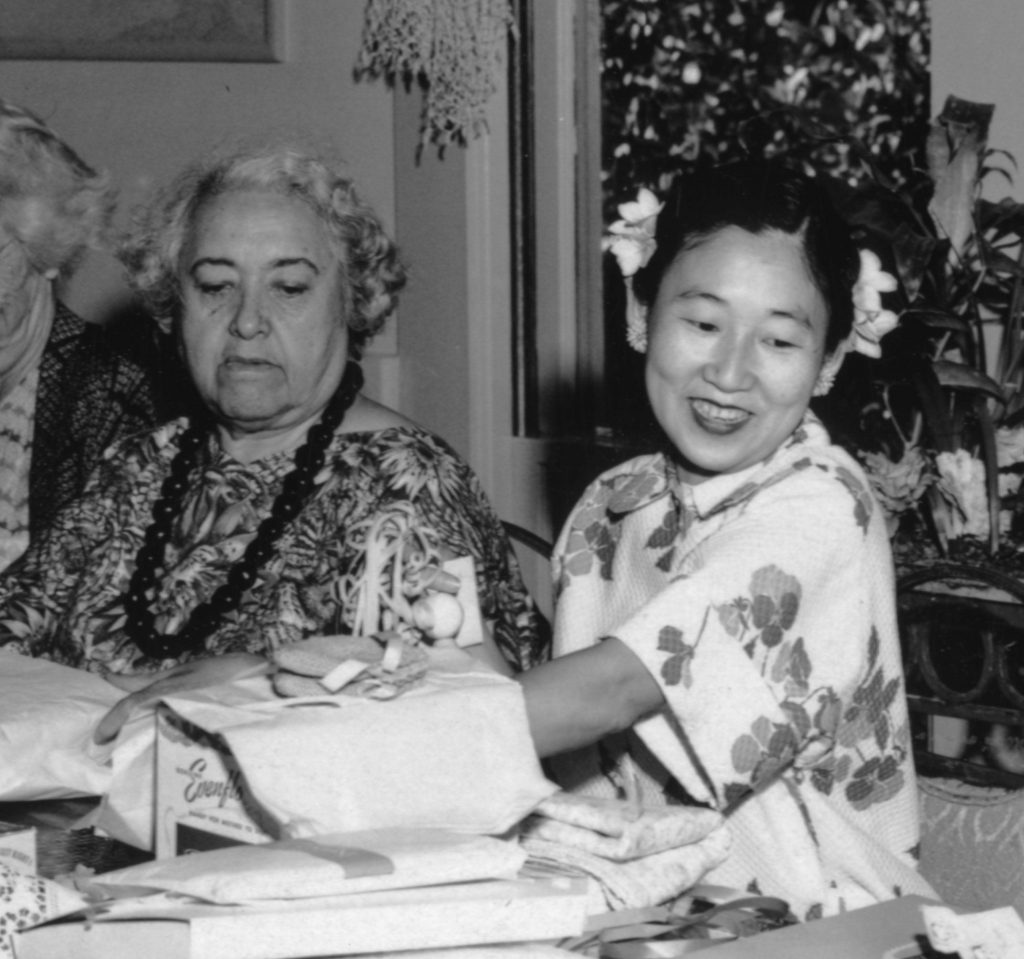 Patience Namaka Wiggin was born on February 10, 1920, in Waimea, Kauaʻi. She was adopted at just eight weeks after her birth by Paahana and Henry Wiggin and brought to be raised in their home on Birch Street, in Honolulu. The newborn was a gift to their daughter, Mary Kawena Pukui. Early life with this three-generational Hawaiian and haole ʻohana prepared Pat for the many years of learning and documenting that would adorn her time with her māmā, Kawena.

As companions in life and knowledge, Kawena and Pat would come to study with some of the last individuals in a knowledgeable generation of teachers of hula, oli, and mele. Pat learned her first hula, “Mūkīkī Wai,” at age four. By age 14, in 1934, she would formally train with Keahi Luahine in Kaka‘ako, O‘ahu, at her home on Ilaniwai Street. Luahine had been a court dancer for King Kalākaua and later for Queen Liliʻuokalani. Pat would also come to train under the hula master Joseph Ilalaole, Kawena’s cousin from Puna, Hawaiʻi, who spent his childhood living with Princess Ruth Keʻelikōlani on Oʻahu and who danced for our aliʻi in the nineteeth century. Both Kawena and Pat completed their training with Ilalaole in 1938, with Pat learning the many dances while Kawena was hoʻopaʻa, learning the chants and accompaniment.

Patience Namaka Wiggin Bacon was a part of Bishop Museum throughout her life. Well before she was officially employed by the Museum, her childhood was spent at Kaiwiʻula assisting Kawena at work or (when not so occupied), playing with the other children of employees. At the age of nineteen Aunty Pat found her first official employment at the Museum when she was hired as a telephone operator. After leaving in 1945 to focus on her family, she returned to the Museum in 1959 as assistant to the manager of the book shop. She would carry on through different positions and departments at the Museum: administrative assistant to the chairman of the Anthropology Department (beginning in 1966), research assistant in the Library & Archives (1990s), and Senior Cultural Advisor for the Museum (2003–2010).

After over half a century of dedication, Aunty Pat left her desk in the Library & Archives to retire in 2010. Some of her most generous contributions are the transcriptions and translations, handwritten on yellow pads of paper, documenting and interpreting the oral histories of Mary Kawena Pukui. Aunty Pat’s years spent as Kawena’s companion in life and knowledge-seeking had prepared her uniquely for this task. But she herself recognized the monumental scope of the work to be done: “What I am doing, I will never finish.”

Aunty Pat offered herself to the rigorous work of preservation, bringing joy and insight to those who shared with her in this endeavor. To her compatriots in and outside the Museum, she was also a confidante, an unwavering source of support, comfort, and wisdom. Many remember her mentorship as quiet but meaningful, subtle but clear. Patience Bacon is as much a part of this ʻāina as are the famed winds that inhabit it, from where the sun rises each day at Kumukahi to Lehua where it sets—sometimes dancing along like a gentle breeze, sometimes making her presence known with a playful gust to remind us to keep on moving forward with purpose. That is the Aunty Pat we all will remember, carrying with her so much life and living, and just like the wind, generously sharing it with those in her path.

Each of us who interacted with Aunty Pat have our own personal treasures from those days. But for those of you who have not been lucky enough to sit and talk with her, all is not lost. Just as you can still spend time with her mother within the collections of the Library & Archives, you can find Aunty Pat there as well. Her legacy lives on. 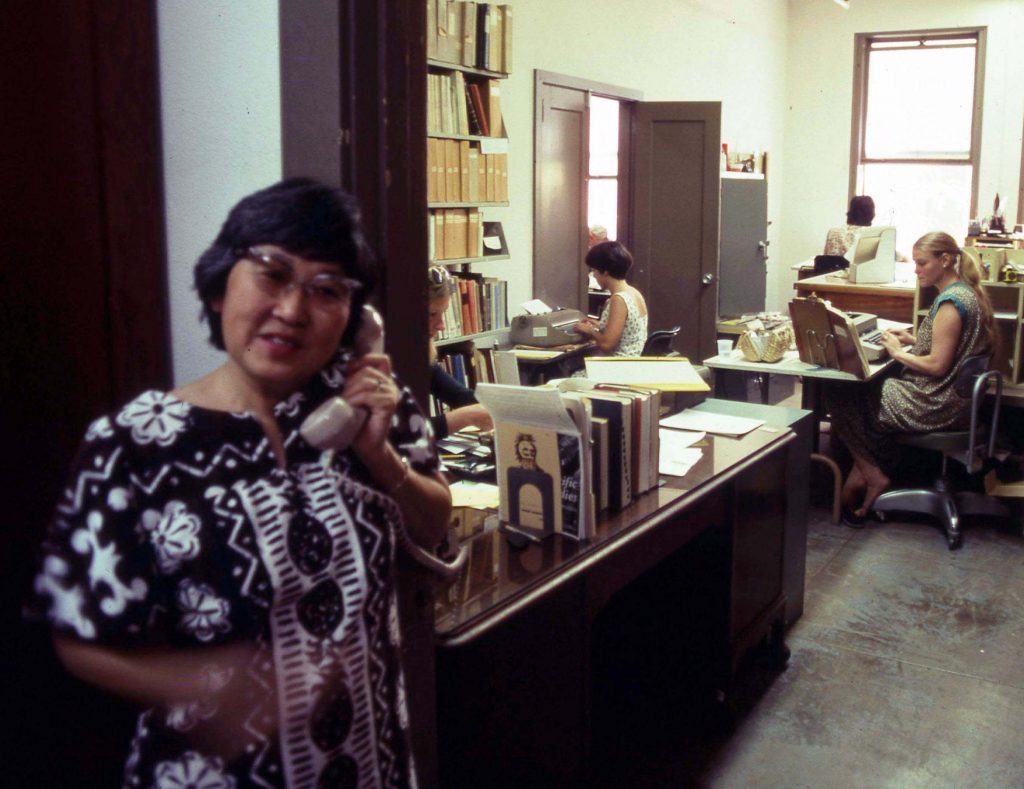 The family of Aunty Pat has kindly requested that donations in her memory be directed to Bishop Museum Library & Archives.

Mahalo for mentoring so many of us...

“Mahalo for mentoring so many of us. We have been active in the work of the perpetuation of Hawaiian culture and language because of your quiet support and strength. All of us and Hawaii owe you a great debt of gratitude. Mahalo for your aloha and kakoo. Na ke Akua oe e Hoopomaikai. Me ke Aloha nui.”

Namaka in life kept the Museum on its strong and destined path...

“Namaka in life kept the Museum on its strong and destined path of perpetuating and preserving the critically important pieces of life and lives experienced by past generations and the equally important values and memories which guided society initiated by her mother and assisted by Ele Williamson. In her very being she embraced and embodied the host culture. Namaka in passing has left to us the challenge of continuing her work for our and future generations as we strive to hold dear to ‘ike Hawaiʻi and those qualities that make Hawaiʻi a special place… Ua ao Hawaiʻi ke ʻōlino nei mālamalama. Be well.”

When I became a permanent member of the Anthropology department back in 1973 or so I got to know Pat a little better instead of just seeing her during vacations when I would do contract work as a student. She was always quiet and calm despite typing reports for the staff using carbon paper on her Selectric typewriter, this was before we had a permanent editor and typist who prepared the archaeology contract reports. I don’t know how she kept up with all the rewrites that the senior staff as well as Dr. Sinoto kept giving her. She never seemed to get ticked off starting over when there were too many revisions especially reports that Marion Kelly did. She must have gone through a lot of carbon paper. And she had beautiful handwriting like so many people of her era, like my father.

Later, as I became more of a fixture in Konia, she’d share more stories about hula, her adoption, and the early days living on Date street. Aunty Pat, as I called her later in life, was adopted by Kawena Pukui after she was left on the steps of the Hawaiian Humane Society. She would mention the various hula people that came to the house as she was growing up, people most people only read about as being the “greats”. The parties and impromptu dancing with lots of food and drink. Never stories that were gossipy but matter-of-fact. She was herself such a graceful dancer with soft and subtle steps, a hint of swaying hips and her flowing hand motions. Just like Aunty ʻIo you couldn’t always make out the “right” motions like the kind you learned in hula class. Pat wouldn’t dance often but for special occasions at departmental parties we would coax her to dance, what a treat!

There were times when I would ask Pat about traditional practices, names, and other cultural practices. She often clarified things by saying that that’s the way she learned it or how Kaʻu people did things. Pat on rare occasions taught us Hawaiian swear words which were more often descriptive than literal. One of the things that I remember her saying often was “it’s lost in history” when referring to traditional practices. Sometimes, she would refer to someone as Johnny Come Lately when they would come to the museum to seek her counsel on things Hawaiian.

The most important thing she left for me personally was naming my eldest son. Building upon my grandmother’s name and adding a few words, she was able to bridge the generations and capture his essence. Whenever I see him it reminds me of her as well. For that I am forever grateful.”

My Dear Friend Pat Bacon, Aunty Pat to most, was my friend and partner in misfit adventures. I will miss our escapades discovering and eating at “Hole-In-The Wall” diners (Ethels, Ray, etc.)…and especially at Burger King on Dillingham Boulevard. Pat would reminisce about her and George ordering and eating Whoppers…(I might go down and eat one in her honor).

I would walk up the spiral staircase from the library on the 2nd floor to her work space on the 3rd. I enjoyed talking stories with her about her adventures and misadventures along with all the young men she shared meals with….Boy was I envious!

She would show me how she could sit on the floor and with a flourish get up as quickly as she could! Oh my aching bones!

Pat was one feisty, fun loving friend! I miss you Pat!” 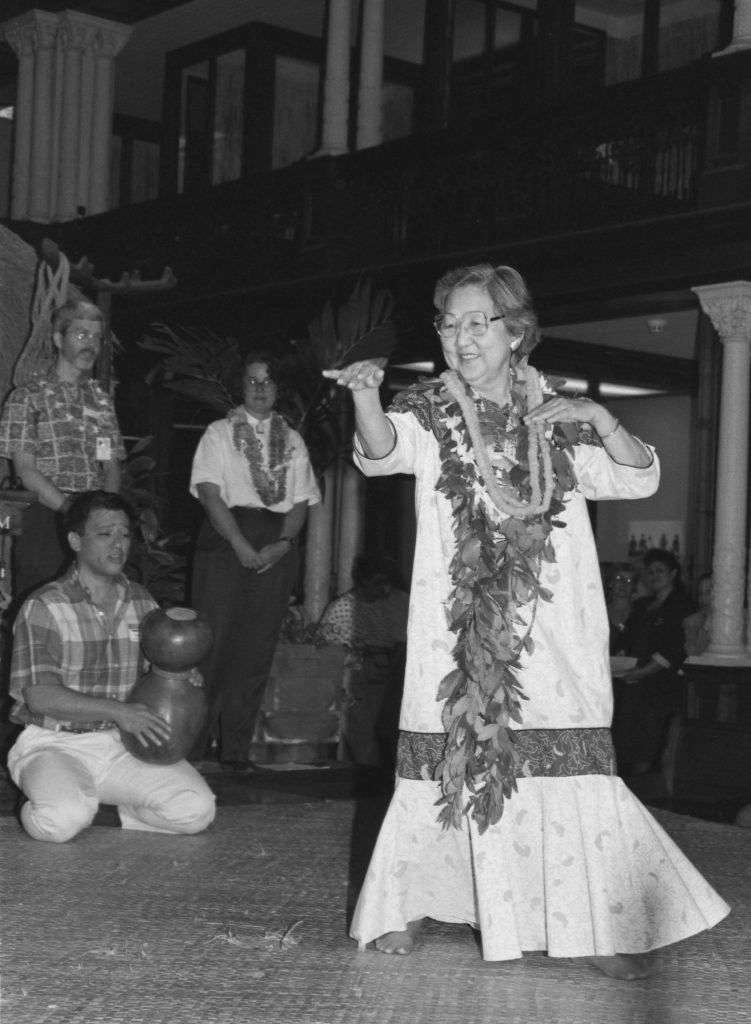 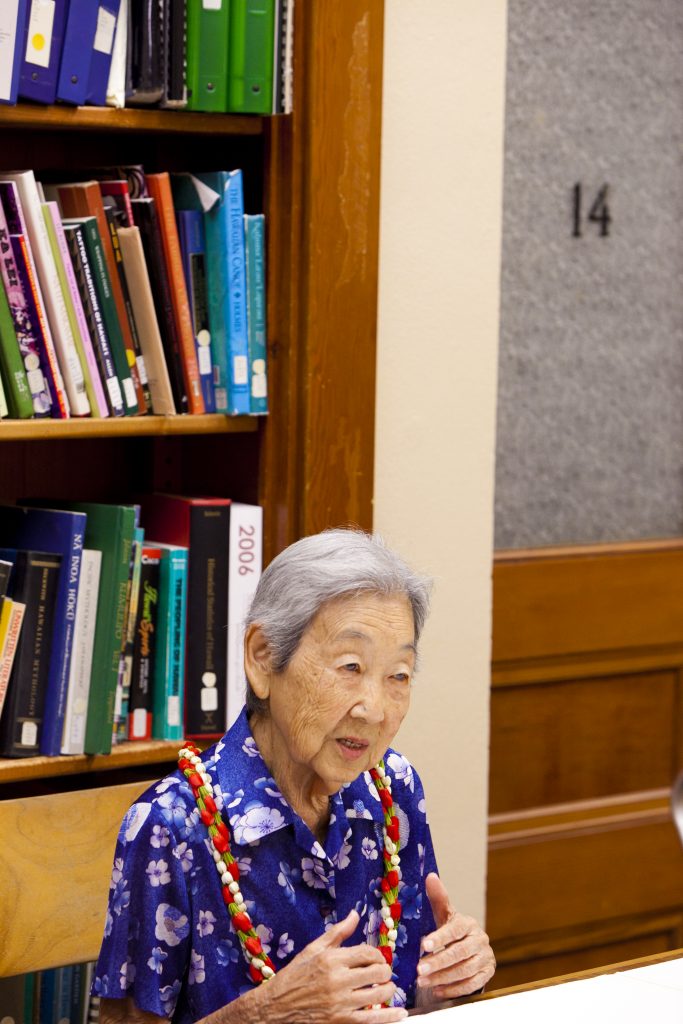 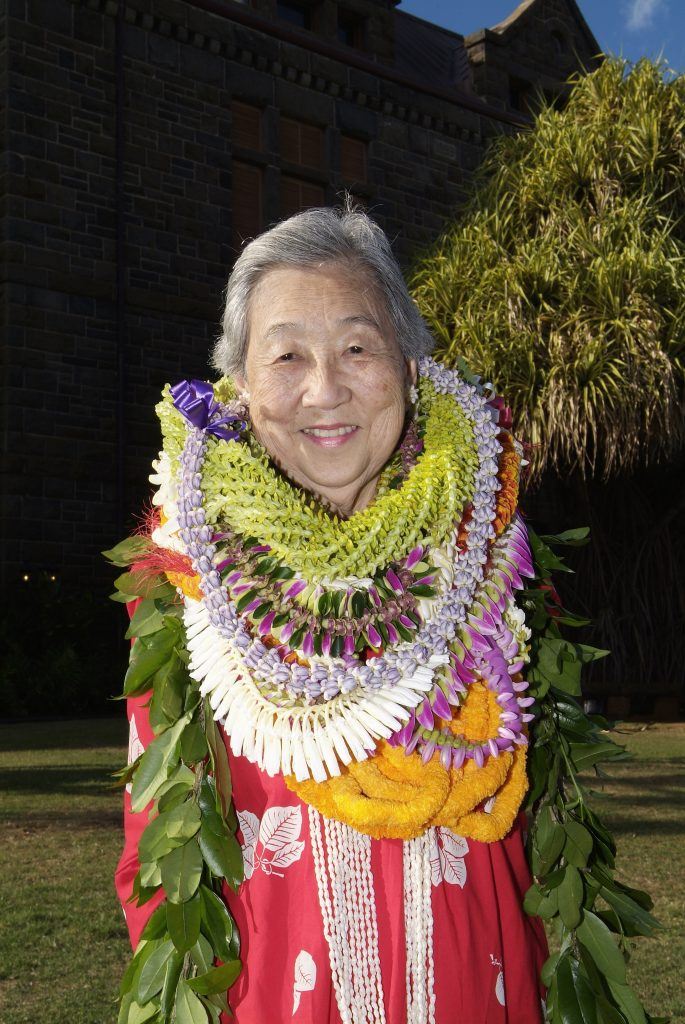