He keiki aloha nā mea kanu. Beloved children are the plants.
It is said of farmers that their plants are like beloved children, receiving much attention and care.

The naupaka plant is known in several stories which provide the backstory for the flowers’ odd half petal shape. One story tells of a princess named Naupaka and her lover, a handsome, gentle-hearted fisherman named Kauʻi. At that time, it was unheard of for those of noble birth to marry someone of a lower rank. Knowing that she and Kauʻi would not be allowed to be together, Naupaka wept. Although they were saddened by the social system in place, the pair persisted and were told to visit a kahuna (priest). Upon listening to their story, the kahuna decided that the final decision was entirely up to the gods. A heavy rain poured, along with a loud clap of thunder and a flash of lightning. The gods had spoken, and their disapproval rang loud and clear. Naupaka took the white blossom from her hair and tore it in half, giving the other to Kauʻi. She declared that she would live the rest of her life in the mountains, while he lived near the sea (Beamer, 35.) The half petals are seen today in varieties along the coast and in the mountains (naupaka kuahiwi) as a reminder of their love. The berries of this coastal plant are also buoyant, making it easy to transport over the open ocean. Image courtesy of Forest & Kim Starr.

Plants in Hawai‘i can be separated into two main types: native and non-native. Native plants were introduced to the islands naturally, meaning they arrived in Hawai‘i via three processes: wind, wave and wing. Some seeds were light enough to be picked up and transported by wind currents. Plant parts that were buoyant, or could float, used wave currents that drift to the islands and wash up on shore. Birds carrying the seeds or berries in their system, or carrying seeds among their feathers, transport them as they arrive in the islands by flight. These three processes also imply that many of these native plants made their way to our shores long before the first Polynesian settlers arrived. Native plants are usually separated into two categories: indigenous and endemic plants. Indigenous plants can be found in other parts of the Pacific and the world, whereas endemic plants occur naturally in one specific area or region. Like other parts of the Pacific, Hawai‘i is known for its high endemic biodiversity. All endemic plants—at one point in time—were indigenous, until the conditions of that specific area forced that plant to evolve and adapt!

Non-native plants are those understood to be introduced to the islands by human beings. They are generally split into two types, depending on when they were introduced. Any plant introduced after the year 1779 is considered a recently-introduced plant. These plants were seen in the islands after the first documented arrival of non-Pacific Islanders to Hawaiʻi, in this case, the third voyage of Captain James Cook. Any plant introduced prior to 1779 is considered a Polynesian-introduced plant. Brought by canoe, they are now called canoe plants. These were plants that Pacific Island peoples needed to bring with them on their journey over our vast ocean–plants that could not have arrived to the islands naturally, and were used as provisions for meals, medicines, and materials.

Bishop Museum continues to be a key institution for understanding and protecting the native flora and fauna of Hawaiʻi, and you can help by getting involved and interacting with iNaturalist: a mobile app that can be downloaded to smartphones. Or, come visit iNaturalist.org to help us collect and analyze data about our natural world. Parents can register online to make observations with keiki as families! 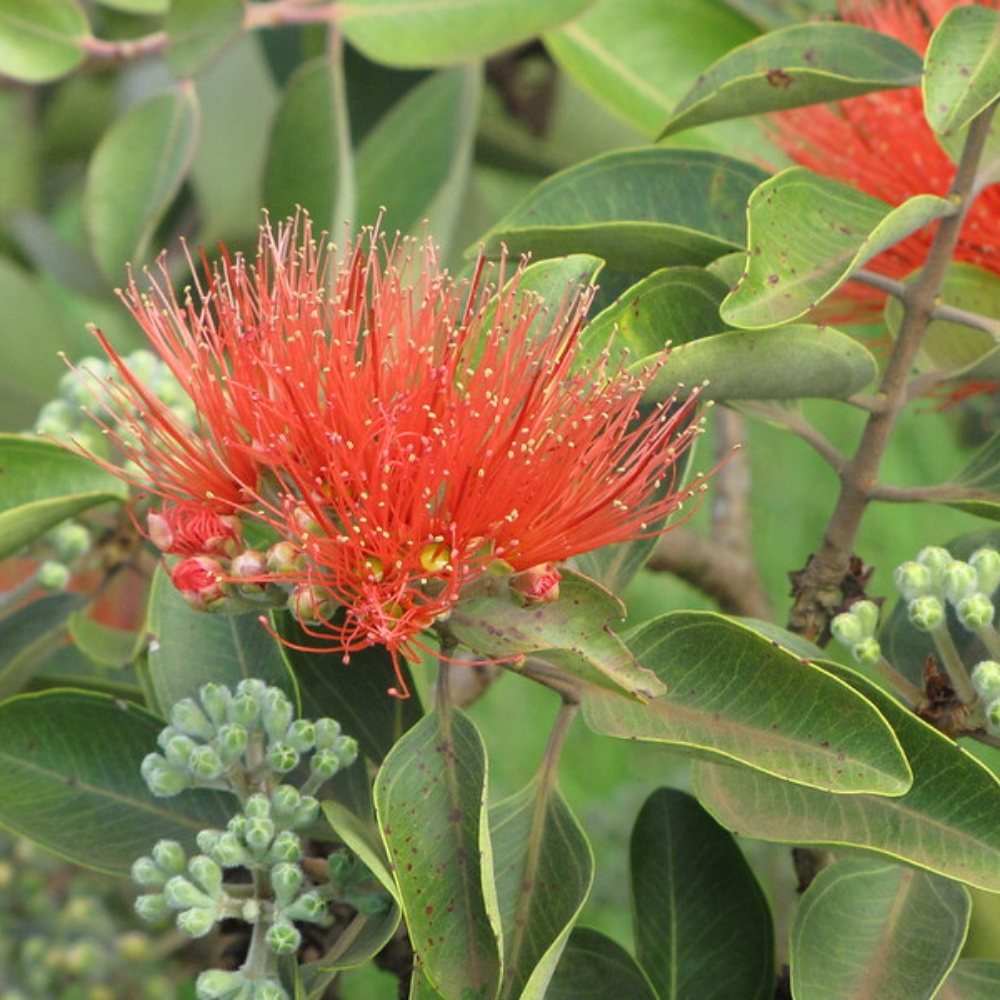 ʻŌhiʻa lehua is the most common forest tree in Hawaiʻi, found currently on all islands except Niʻihau and Kahoʻolawe, from near sea level to over 9,000 feet in elevation. This endemic tree is one of the first plants to appear on any new lava flows, and is a home and food source for many forest birds and insects. The plant is also sacred to the goddess Pele. Its hard wood has many uses, and blossoms and young leaves are used in lei. Rapid ʻŌhiʻa Death (ROD) is a fungus that has resulted in the death of hundreds of ʻōhiʻa trees in Hawaiʻi. Two pathogens of the fungus exist: Ceratocystis lukuohia and Ceratocystis huliohia. Image courtesy of Forest & Kim Starr.

ʻĀkia is recognizable by its tiny yellow flowers and bright red berries. The plant was once thought to be poisonous because plant parts could be beaten and placed into saltwater ponds–a concoction that is believed to have the ability to stupefy fish, making them easy to catch. Its bright red berries are thought to be attractive to native birds. Image courtesy of Forest & Kim Starr.

Now a major food crop in many parts of the world. Sweet potatoes may have emerged botanically in South America, but by the time European travelers were moving through the Pacific Islands in the eighteenth century, many island cultures were already well-versed in growing this adaptable food plant. Seen as far away as places like Aotearoa New Zealand and Rapa Nui, in Hawaiʻi, ‘uala was cultivated as a dryland crop and could be grown in mounds called puʻe ʻuala, terraced areas, or flat ground. The potato as well as the leaf was eaten in the past, as it is today. Image courtesy of Forest & Kim Starr.

Hala trees can be either male or female. The male hala can be recognized because it flowers, producing a male flower, or inflorescence, called hīnano with a specific scent. The female hala can be recognized by its fruit, which also resembles pineapple. In fact, the Hawaiian word for pineapple is hala kahiki, or foreign hala. Lau hala or hala leaves are the material that is woven to make items like mats, hats, or baskets. Image courtesy of Forest & Kim Starr.

Mangoes. Carved wooden plaque by Manuel Silva. Mango trees are common in Hawaiʻi, however it is actually considered a recently introduced plant. Mangoes originate from South/Southeast Asia and are categorized as invasive.