What is Earth Day?

What is Earth Day?

Earth Day is a day set aside to recognize the importance of taking care of our planet, or as we call it in Hawaiʻi, mālama hōnua (taking care of the earth). The theme for this year’s Earth Day revolves around the earth’s climate. Our climate is the earth’s weather over time. Sometimes we talk about climate in relation to specific places or regions, as climate varies from place to place. However, when we talk about climate change, we look at how our weather has changed over time. Visible and non-visible changes in air and water pollution are seen in the rise of carbon emissions and marine debris in our waters, both of which are effects of human consumption. Some believe that there are no changes, but when we take a look at the impact we have as humans on the world, we have the ability to set an example of what we want our world to look like, so why not make it the best it can be?

The first official Earth Day was back in April of 1970, but in Hawaiʻi, the more common ideas are that of mālama ʻāina (taking care of the land) and aloha ʻāina (love of the land). Let’s take a look at the word ʻāina. You have the word ʻai at the beginning of the word, which is the verb, “to eat”. So when you put the word ʻāina together, it means, ‘that which feeds not only humans, but everything’ (Professor Jon Osorio). Aloha ʻāina and mālama ʻāina are concepts that have been present in Native Hawaiian culture long before the 1970s. In the past, there was no concept for the selling or purchasing of land, rather, Hawaiians interacted with and tended to the land as stewards. This is seen in the story of Hāloa below, along with the story of Kū, which reminds readers of the significance and relationship between nature and the people of the land. These deep connections are not only seen today in people who care for conservation land or special natural areas, but in the care taken by the mahiʻai (cultivators) in their fields, patches, and farms to grow food. In fact, our moʻolelo, or stories, that were passed down for generations speak of the strong bond between our people and the nature of our beautiful island home. 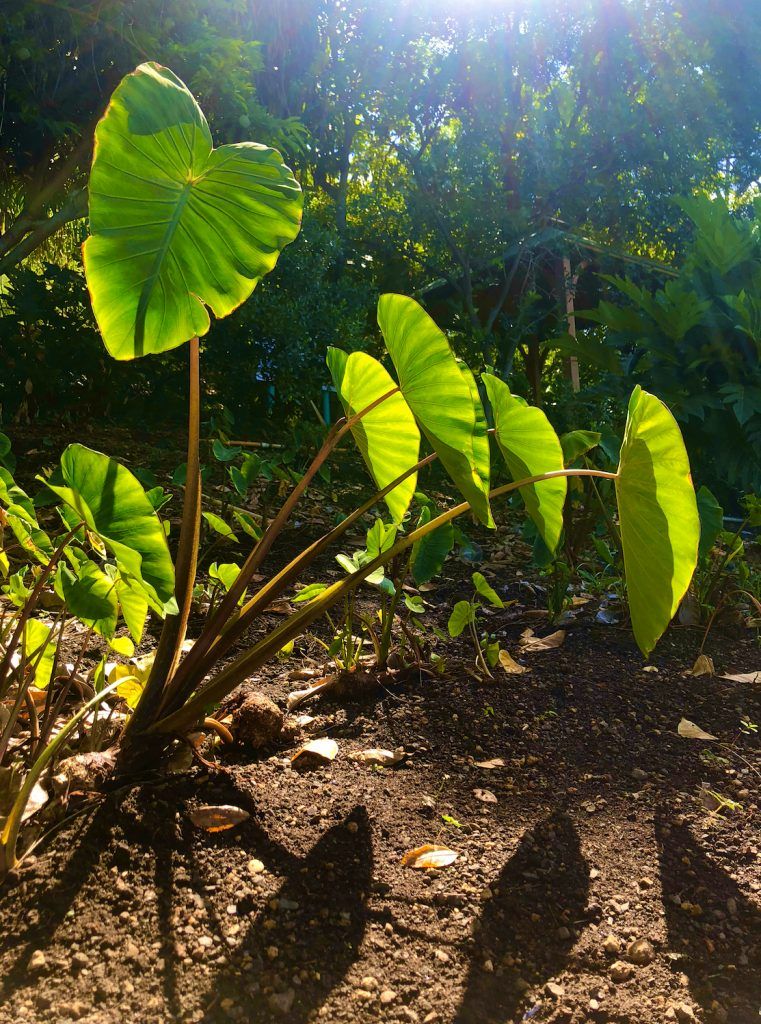 Kalo or taro is an important staple in Hawaiʻi and is also widely used throughout the Pacific. It’s known mostly for its corm or tuber which is first steamed or cooked, then pounded to create what we call paʻi ʻai. Getting from paʻi ʻai to poi is based mainly on water content. Paʻi ʻai is made using as little water as possible, whereas poi has more water content, giving it more of a liquid or gooey texture. Lūʻau, or leaves of the kalo plant, are seen in the Hawaiian dish laulau (pork and butterfish wrapped in kalo leaves).

The story of Hāloa introduces the first kanaka, or the first Hawaiian man. It starts when sky father Wākea falls in love with the goddess Hoʻohokukalani. The pair were then gifted with a baby boy, but sadly, their child was stillborn. His mother buried him and wept for days over the soil until one day, up sprouted a shoot. We know this today to be the kalo or taro plant, but Hoʻohokukalani saw the way his leaves moved in the wind and named him Hāloanakalaukapalili, which means “the long stem whose leaves fluttered in the wind.” After some time, Hoʻohokukalani had another child, this time, a healthy baby boy, who she named Hāloa, after her firstborn.

Hāloa is understood to be the first kanaka Hawaiʻi (Hawaiian person), the prominent ancestor of all Hawaiians. The relationship between Hāloa and Hāloanakalaukapalili (the kalo plant) is that of siblings. From this relationship comes the idea that they are both dependent on one another for survival. Hāloanakalaukapalili provides nourishment for his younger brother, and Hāloa provides cultivation to care for his older brother. In this exchange, they grow and support each other, which is a valuable lesson for remembering the balance between the needs of the people and the needs of the land.

The Story of Kū

Many akua (deities) are known in Hawaiian culture, but famous among them is the akua named Kū, who takes part in many moʻolelo and practices that continue to this day. In one story, Kū travels to Hawaiʻi from far away and takes up the guise of a mortal farmer. Eventually, he is taken in by the community, he raises a family with his partner, Hina, and things are well. Some time later, famine and drought strike the land, bringing Kū’s mortal family and friends to the brink of starvation. Kū knows he can save them, but he must leave and never return. He informs his family, who are heartbroken, but trust his intentions. Kū stands upon the land headfirst and disappears. Hina’s tears flow from her eyes onto that spot, and not long after, a plant appears. This small plant grows tall and later makes large fruits that can be eaten. This is the first ʻulu (breadfruit) tree, which saves the people from starvation. 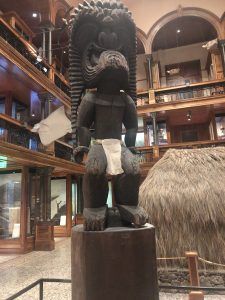 The kiʻi, or image, shown here is made of the same material mentioned in the story of Kū and is also carved into the perceived shape of the god. Only three of these images are known to exist today. The first is the kiʻi shown here, which is cared for at Bishop Museum, whereas the other two kiʻi are located at the British Museum in London and the Peabody Essex Museum in Massachusetts. 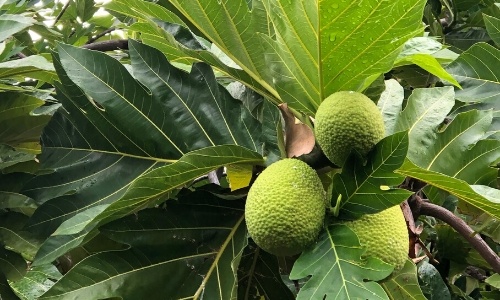 This canoe plant, called ʻulu in Hawaiʻi, has a wide variety of uses. Its heavy wood can be carved into surfboards or other types of papa or boards. As a member of the mulberry family, its bark can also be fashioned into kapa (barkcloth)―although wauke was the preferred material―and its fruit can be eaten (after being cooked or steamed, of course). 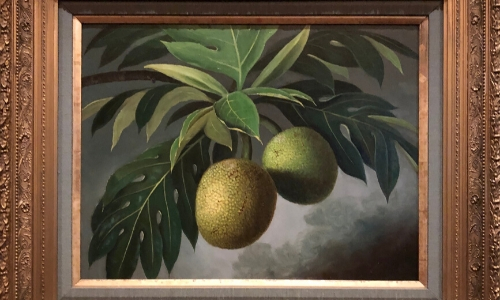 Oil on wood board, attributed to Margaret Girvin Gillin (1833–1915) ca. 1880. This painting was purchased from the artist by Princess Bernice Pauahi Bishop herself and is seen here in our Picture Gallery.