Today, we celebrate Lā Hoʻihoʻi Ea, Sovereignty Restoration Day. Established on July 31, 1843, by Kauikeaouli, King Kamehameha III, it became one of the first national holidays of the Hawaiian Kingdom along with Lā Kūʻokoʻa, established on November 28th of the same year. Lā Hoʻihoʻi Ea was celebrated annually with great pride throughout the 19th century. There were large community gatherings and formal affairs hosted by the King himself. The pictured invitations to a royal dinner held on July 31, 1844, addressed to Gerrit P. Judd and Laura F. Judd were part of a three-day festival filled with processions, feasts, song, and dance. However, following the illegal overthrow of the Hawaiian Kingdom in 1893, these national holidays gave way under the occupying governments.

In 1985, through the efforts of Dr. Kekuni Blaisdell and other Native Hawaiian leaders, the celebration of Lā Hoʻihoʻi Ea was reestablished. It has since become a significant community event, creating a space for celebration and the growing awareness of Hawaiian nationalism and education.

In the words of Kamehameha III, who proclaimed on this day, “Ua mau ke ea o ka ʻāina i ka pono” (The life [sovereignty] of the land is perpetuated in righteousness [justice]). 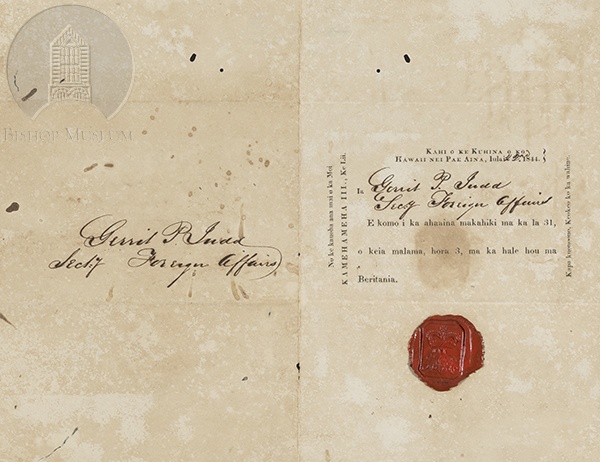 Image sharing on social media is welcome; for all other uses, please contact Archives@bishopmuseum.org. 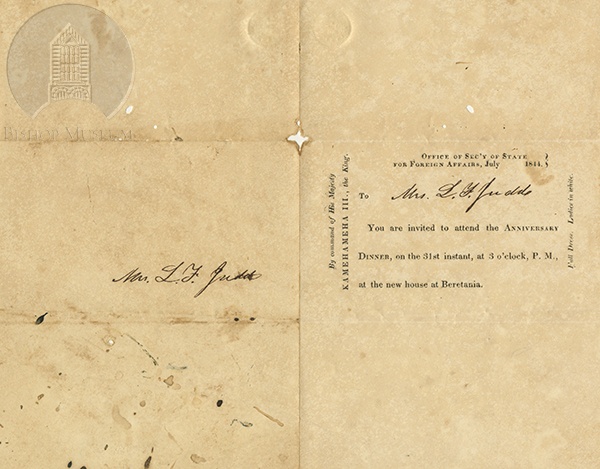 Image: Image 2: Invitation written in English by command of His Majesty the King Kamehameha III to Laura F. Judd to attend the anniversary dinner held on July 31, 1844, at 3 p.m. at the new house at Beretania. With noted attire as “full dress” and “Ladies in white.” Bishop Museum Archives. QM 210518.

Image sharing on social media is welcome; for all other uses, please contact Archives@bishopmuseum.org.