Here is another example from Kepelino’s series of bird descriptions, “He Vahi Huli-toa Manu Havaii,” from Hoiliili Havaii. The ʻio is the first bird Kepelino introduces in his bird series. The translation is from Mary Kawena Pukui as it appears in the HEN Notes.

The Indigenous Birds of Hawaiʻi

The ʻio is large in appearance, like an owl or a chicken. Its flesh is as delicious as the flesh of a chicken or a turkey. Such ʻio are dark, some are light, some are reddish brown like an owl, and some are speckled like a speckled chicken. Its head is not like the head of an owl but is like that of other birds and its beak is somewhat like that of a crow. Its beak is not long nor is it very short but … 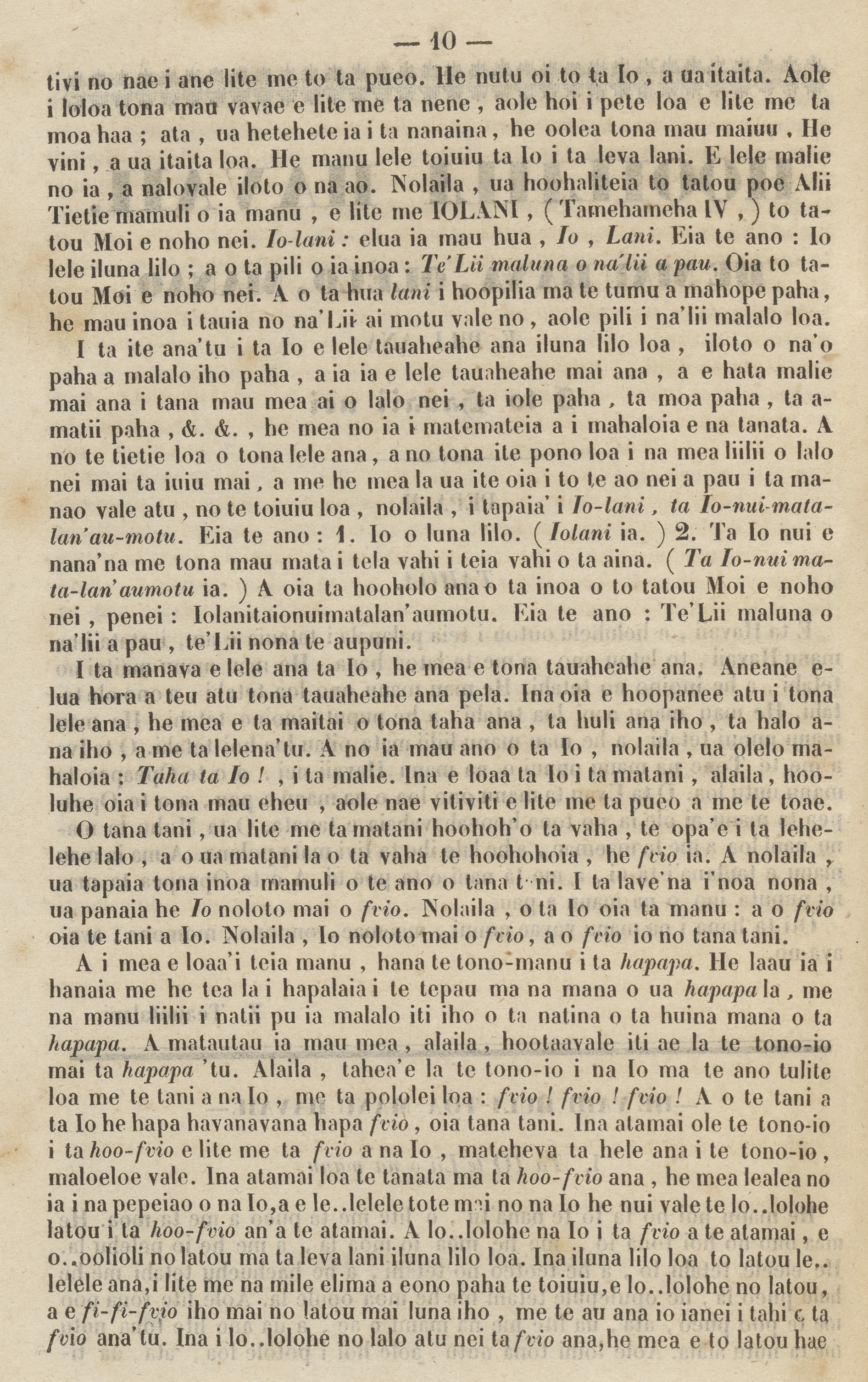 …is hooked almost like that of an owl. The ʻio has a sharp and strong beak. Its legs are not as long as a goose’s and not as short as a short hen’s, but is well formed and with strong talons. They (the talons) are sharp and strong. It is a bird that soars high up in the sky. It flies easily and vanishes among the clouds. Therefore the high chiefs are compared to such birds, as ʻIo-lani (Kamehameha IV) our present ruler. ʻIolani is made up of two words, ʻio and lani. This is what it means: ʻio, one who soars on high and the second definition is, “the chief over all chiefs.” That is the name of our present ruler. The word “lani” which is added as a suffix is a title given only to ruling chiefs, and not to those lower in rank.

When one sees an ʻio poised away up high, up among the clouds or lower down, one notices that as it is poised there, it looks down quietly for food, a mouse perhaps, a chick, or ʻamakihi birds. It is much admired and praised by people. Because it flies so high and can see small objects from a great height, it is called ʻio-lani, or the ʻio that sees throughout the land. This is what it means: 1. The ʻio away up above (ʻIolani); 2. The great ʻio that sees with its eyes everywhere on the land (ʻIonuimakalanaaumoku). That is the whole name of our present king, ʻIolanikaʻionuimakalanaaumoku. It means the chief above all chiefs, the ruler of the kingdom.

When the ʻio soars it poises beautifully aloft. It remains two or more hours that way. If it moves forward, it dips gracefully, turns, peers down, and flies on. Because of this behavior the saying that expresses admiration came to be used, “The ʻio bird dips in the calm” (Kaha ka ʻio i ka mālie). When an ʻio is caught in the wind, its wings flap but not fast like the owl or the koaʻe.

Its cry is like the whistling made by the mouth when the lower lip is pinched together and the drawing in of the air makes a sound like “firo.” Therefore ʻio was taken from “firo” and “firo” is its natural cry.

The way to catch this bird is for the bird catcher to make a hāpapa. It is a stick made into the form of a cross with the arms gummed and with small birds tied just below the place where the arms are tied on. When it is ready then the ʻio bird catchers goes a little way away from the hāpapa. Then he calls to the ʻio birds in a cry exactly like theirs, “firo! firo! firo!” The cry of the ʻio bird is partly a whisper and partly a loud “firo.” If a bird catcher is unskilled in making the “firo” sound like an ʻio bird’s then there is no use in his going to catch them, he’d only tire his legs. If a man is clever in making the “firo” sound, it is a joyous sound to the ears of the ʻio and many fly down to listen to the “firo-ing” of the clever one. The ʻio birds hear the “firo” cry of the clear one and they rejoice away up in the sky. If they are flying away up, about five or six miles, away out of sight, they hear and cry “fi-fi-firo” from above and follow where the “firo” cry is coming from. When they hear the “firo” coming from below … 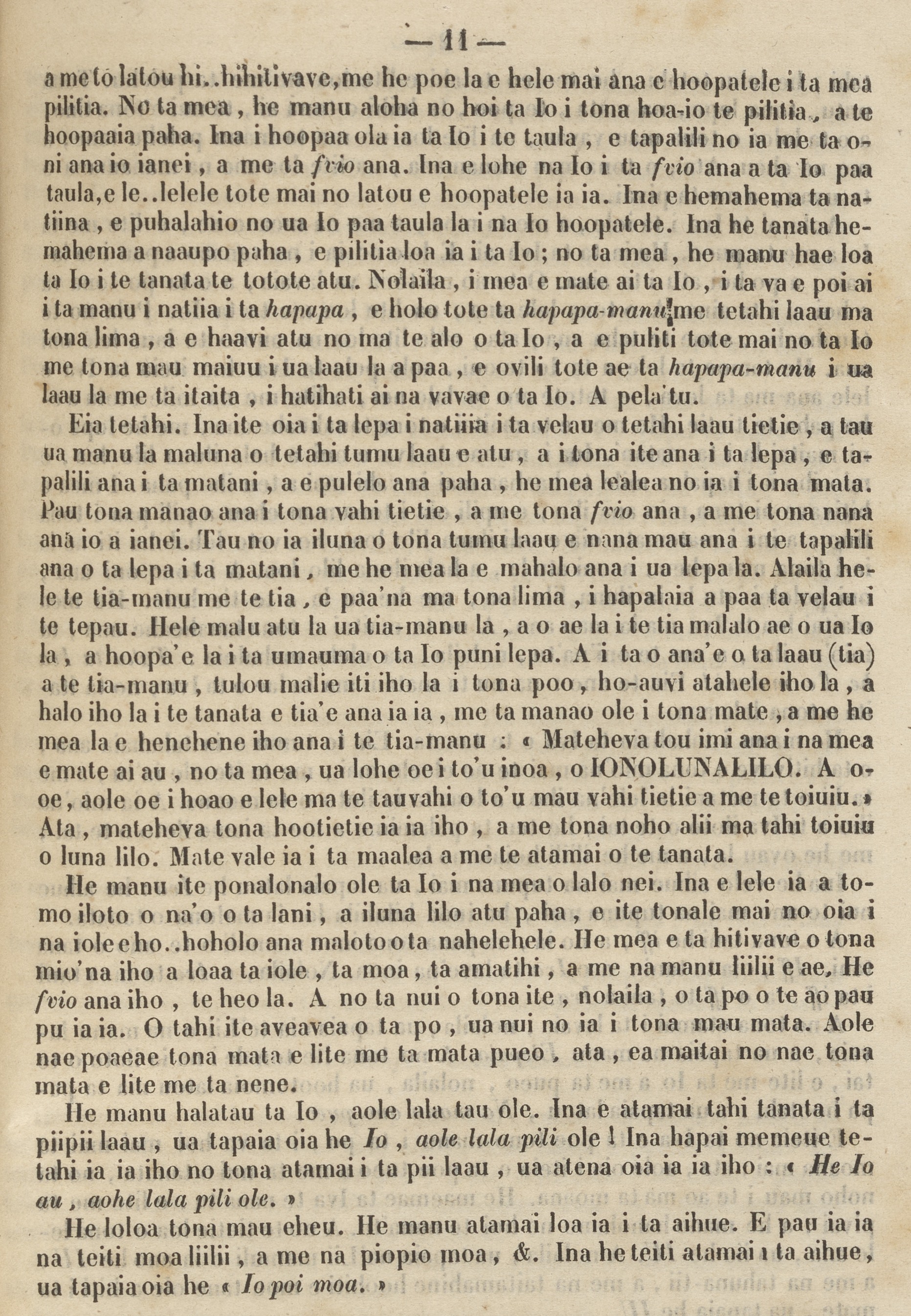 … they hasten and hurry like human beings to save the one who is in distress. Because the ʻio is a bird who loves its fellow ʻio when in distress or when taken captive. If a live ʻio is tied with a cord, it struggles and jerks to and fro and cries “firo.” The others hear the cry of the ʻio that is tied, they fly hither to rescue him. If the cord is not well tied, the captive ʻio will escape with the aid of its rescuers. If a man is careless or foolish he will be badly injured by the ʻio, as it is a bird that flies into a rage when a man comes too close. Therefore, in order to kill an ʻio, he should run up with a stick in hand as soon as it swoops down upon the birds tied to the hāpapa and thrust it in front of the ʻio. It will grasp the stick with its talons, then the bird catcher twists the sticks around rapidly, thus breaking its legs. And so on.

Here is another thing. When it sees a strip of cloth tied to the end of a long stick, it alights on a nearby tree and watches the banner fluttering in the breeze or billowing upward, it is a merry sight to its eyes. It perches in the tree and watches the fluttering of the banner in the breeze as though in admiration. Then the bird catcher (kia manu) goes with a kia (bird catching stick) whose tips are well gummed, in his hand. The bird catcher sneaks up quietly and raises his stick under the ʻio until it touches the breast of the bird who is fascinated by the banner. When the bird catcher raises the stick, the bird’s head comes down, then it is cocked slightly as it looks at the man who is holding the stick up to it. It seems careless of death, as though mocking the bird catcher, “There is of no use of your seeking means of destroying me because you have heard my name, the-ʻio-bird-away-up-above. As for you, you have not tried to fly to any of my high and distant places.” It is useless for it to exalt itself and its throne out of sight, above. It is easily killed through the skill of man.

It is a bird that does not fail to distinguish anything below. If it flies into the clouds of heaven or higher above, it will see the rats running about among the weeds. With a quick swoop the rat, chick, ʻamakihi bird, or other small birds are caught. There is a cry of “firo,” and it is gone. Because of its excellent vision, it can see both in the night and in the day time. The dimness of the night is clear to its eyes. Its eyes are not deep set like the eyes of the owl but they are well shaped like the eyes of a goose.

Its wings are long. It is a bird that is clever in thievery. It can take all the chicks and partly grown chickens, etc. If a boy is clever in stealing, he is called a chicken catching ʻio bird (ʻIo poʻi moa).1 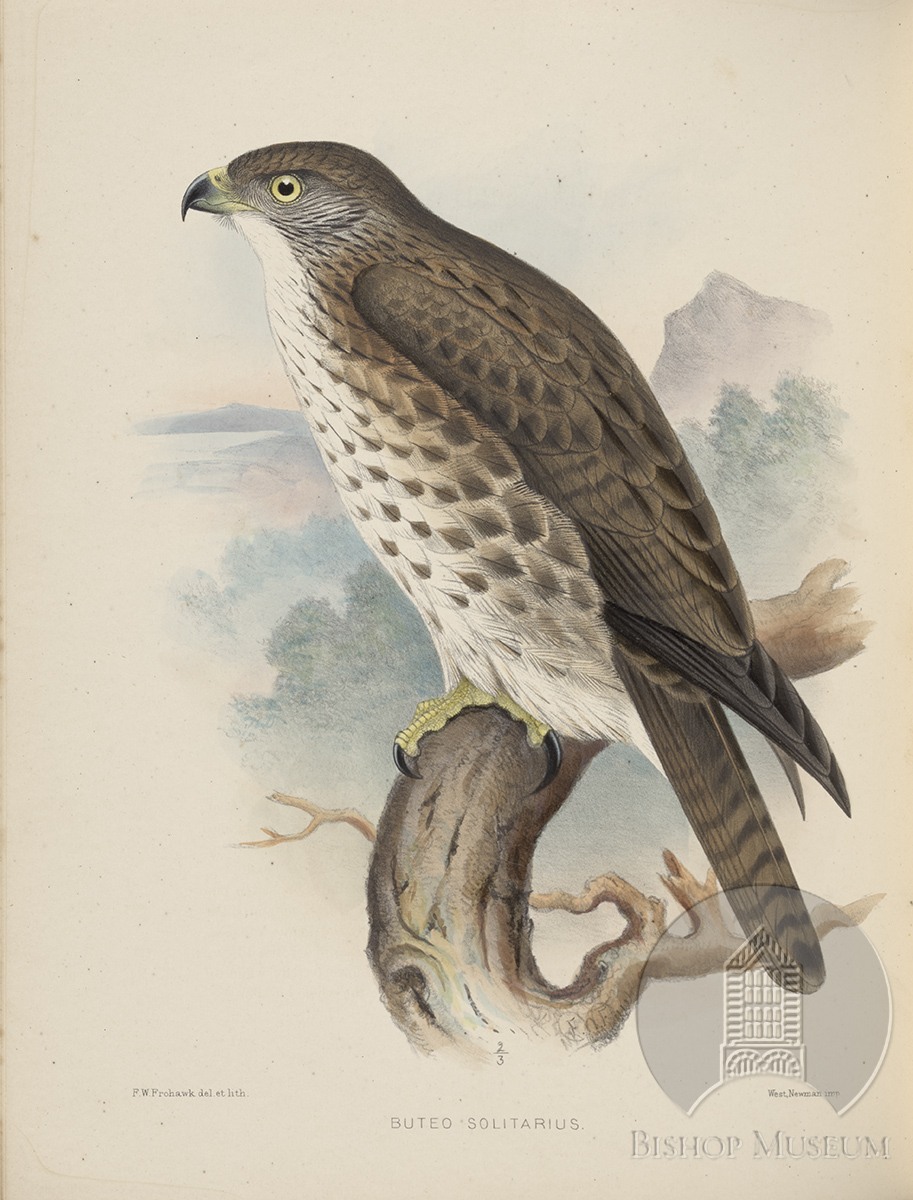