A Place to Talk About Place

Dear Reader, newspapers were a place to talk about wahi pana or storied places. In its pages traditions could be recorded and stored away for future generations, lest the stories be forgotten and lost with time.

The following account about the wahi pana called Pali Kapu o Keōua, or the Sacred Cliff of Keōua was published in Ka Hoku o Hawaii on March 31, 1910.

The Sacred Cliff of Keōua

There are many famous storied places [wahi pana] of the land ancient days, and they were named because of the famous deeds of the aliʻi of the land. In the upland of the monument to Captain Cook that stands in Kaʻawaloa, there lies the Sacred Cliff of Keōua [Pali Kapu o Keōua].

Some believe that this cliff is named after Keōua Kua ʻAhuʻula [Keōua Kūʻahuʻula], but that is not the truth, for Kona is where Keōua Kua ʻAhuʻula dwelt, but he was a chief of Kaʻū, and it was from Kaʻū that he came to meet with Kamehameha. He perished in Kawaihae and was baked in an imu upon Puʻukoholā, and it is for him that this dirge was composed by his beloved attendant, Kuakahela.

My lord in the rain of Haao,

The rain flies fast, flies over the plain of Auaulele

The rain flies, driven by the wind

The rain drives down the cliffs above

The one for whom this sacred cliff is named after is Keōua Nui who is believed to be the actual father of Kamehameha I, and he was a kapu chief who was honored by his favorite attendants.2

This was a sacred cliff in old times, and the shadow of a makaʻāinana was not to fall upon this cliff, the punishment being death for the person who broke this kapu. It was at noon when the sun was directly overhead that a man could go and escape with his life. This perhaps was done during those long ago days because of the fiery kapu of the chiefs of the time.

Close to these places are the bathing waters of Hāliʻilua and the burial pit where the bones of the aliʻi were deposited which was known as the “Ka Lua o Hooaiku [Ka Lua o Hoaiku]” or “The Pit of Hoaiku.”

Atop this Sacred Cliff of Keōua is where Moho mistakenly ate the intestines of Captain Cook believing they were dog intestines.

Kaʻawaloa is famous for the death of Lono, Captain Cook during the days of Kalaniʻōpuʻu, the ruling chief of Hawaiʻi, and the monument erected by the British for him stands; also upon the land of Kaʻawaloa was Kuapehu, the residence of Kapiʻolani Nui, the chiefess who denied the power of Pele.

2 In Place Names of Hawaii by Pukui, Elbert, and Mookini, you will find the listing “Pali-kapu-o-Keōua: A cliff near Ke-ala-ke-kua, Hawaiʻi, Lit., sacred cliff of Keōua (Kamehameha’s foe slain by Keʻeaumoku).” 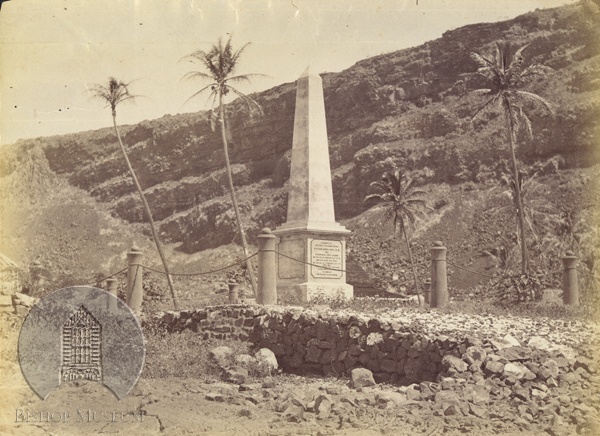