The description provided in an article on the second page of Ka Hae Hawaii printed on December 31, 1856 talks of a larger format newspaper. What is found online however is only the normal-sized issue. There are however several other things that do not make sense even when you know there was also a larger format Ka Hae Hawaii published on the same day.

Here we have a different Hae [Flag] that is fluttering above our homes on this last day of December, and on this last day of the year 1856! How is this new paper? Did the Hae grow, giving it a bigger body, like how plants grow? Did the first Hae come to an end, and we have a new paper that is bigger and better than the earlier one? Not likely. Here is the reason for this new kind of paper. This large and fine paper is a gift for those who subscribe to the Hae Hawaii, and who have paid for the subscription to the paper.

Here is another thing. This large paper is something that illustrates what the Hae Hawaii printed in 1857 beginning with the 4th of March will be like. That will be the end of the first volume of the Hae.

Let’s look at the picture in the masthead of this paper, and consider its nature; there is much perhaps within it. The volcano in the middle, how about that? It is a symbol of the origin of these islands. It is well known by scientists that lava is the foundation of these islands of the Hawaiian Archipelago. All of these islands were raised by the power of lava, that being the hand of God who created this land. On the left side of the volcano, we see the old ways: canoes, war canoes, nets and fishermen, coconuts and people, and grass huts, and other old things. And on the right side is the new ways: the church, school, flour mill, whale ships, and trade ships, and steamship, and other new things. That is the nature of the image in the masthead.1 And there are all sorts of things printed within: the speech of the King is one, which is a good thing. If you were to read and think with consideration and concentration and do as instructed, then you will obtain true wealth. There is a letter of encouragement by Armstrong [Limaikaika] for the new Hae of 1857, and in it you will understand the nature of the new Hae and why it was changed. Within are opinion pieces by a number of people pertaining to various matters we should think about; in it is news of the Hawaiian Islands, and from foreign lands as well, as well as some small things of import from the four corners of the earth.

O Fine people of all the districts of the nation of Hawaiʻi, look at this new paper format. It may or may not be a good thing. Think about it, and should you believe that it is a good idea, then help all of us make it happen. Help by encouraging people to subscribe to the new Hae; for if there are many subscribers, then the yearly cost will be very cheap. I am clarifying to all those who want to subscribe to the Hae Hawaii of 1857 the nature of that Hae. Its size will be like this paper that has been printed, and so too its other characteristics; but perhaps that is not all of the improvements. For we are considering adding illustrations as we get them from Boston, now and then as a way to make clear to the people of this land conduct that is proper.

The cost of the Hae of 1857 is $1.50 for a single paper for a year. The cost was raised a bit, because of the size of the paper and the money that will be spent on the paper, ink, and the printing. But if there are many people in a single district subscribing to the Hae, the agent of that district is able to lessen the price of the Hae a bit, and this is how it will be cheaper: If an agent gets 50 or more people to subscribe, then he could lessen the cost to $1.25 per year for each paper; and if an agent gets 100 names or more, the he could lessen the price to $1.12½ for each paper. This is the rule for the Hae of 1857: The subscription must be paid in advance, then you will receive the paper regularly; we will not send a single paper without receiving payment first, then sending the paper.

Therefore, you people who are thinking of subscribing to the Hae of 1857, make ready your money for your Hae, then when the time comes, pay the agent of your district, then you will receive a new Hae every week for the coming year.

The new Hae will begin on the 4th of March, 1857, and that is when the first volume will be done. Therefore you have two months to look for the money to pay to the Hae. It is not entirely clear at this time the names of all the agents in each of the districts for the new Hae, but after it is known, then I will publicize all of their names in the Hae Hawaii, and it is they who will explain to you all the regulations pertaining to the new Hae.

Aloha to you all,

1The masthead of the gift issue of Ka Hae Hawaii printed on December 31, 1856 is not as described. It is instead a phoenix rising from flames. The new masthead with the old ways on the left and the new ways on the right would not appear until the March 4, 1857. It must have left the reader confused.

Image: Masthead used on gift issue of Ka Hae Hawaii on December 31, 1856. It is not the scene described in the article appearing in this weeks post.

Image: Masthead described in both December 31, 1856 issues, showing the old ways to the left of the volcano and the new ways to the right. This masthead is used from the beginning of the second volume (March 4, 1857) to the end of the fifth volume (March 20, 1861). 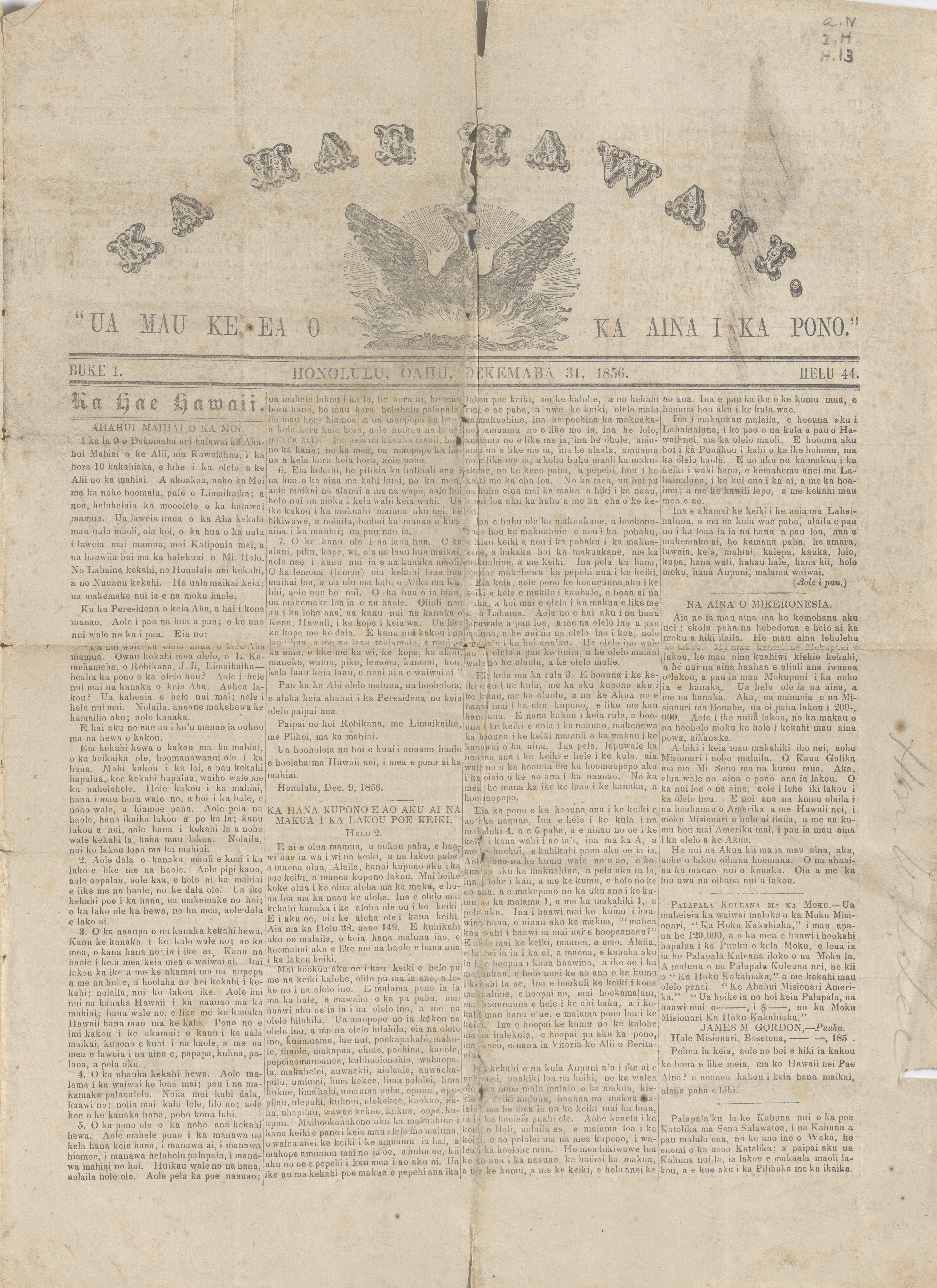 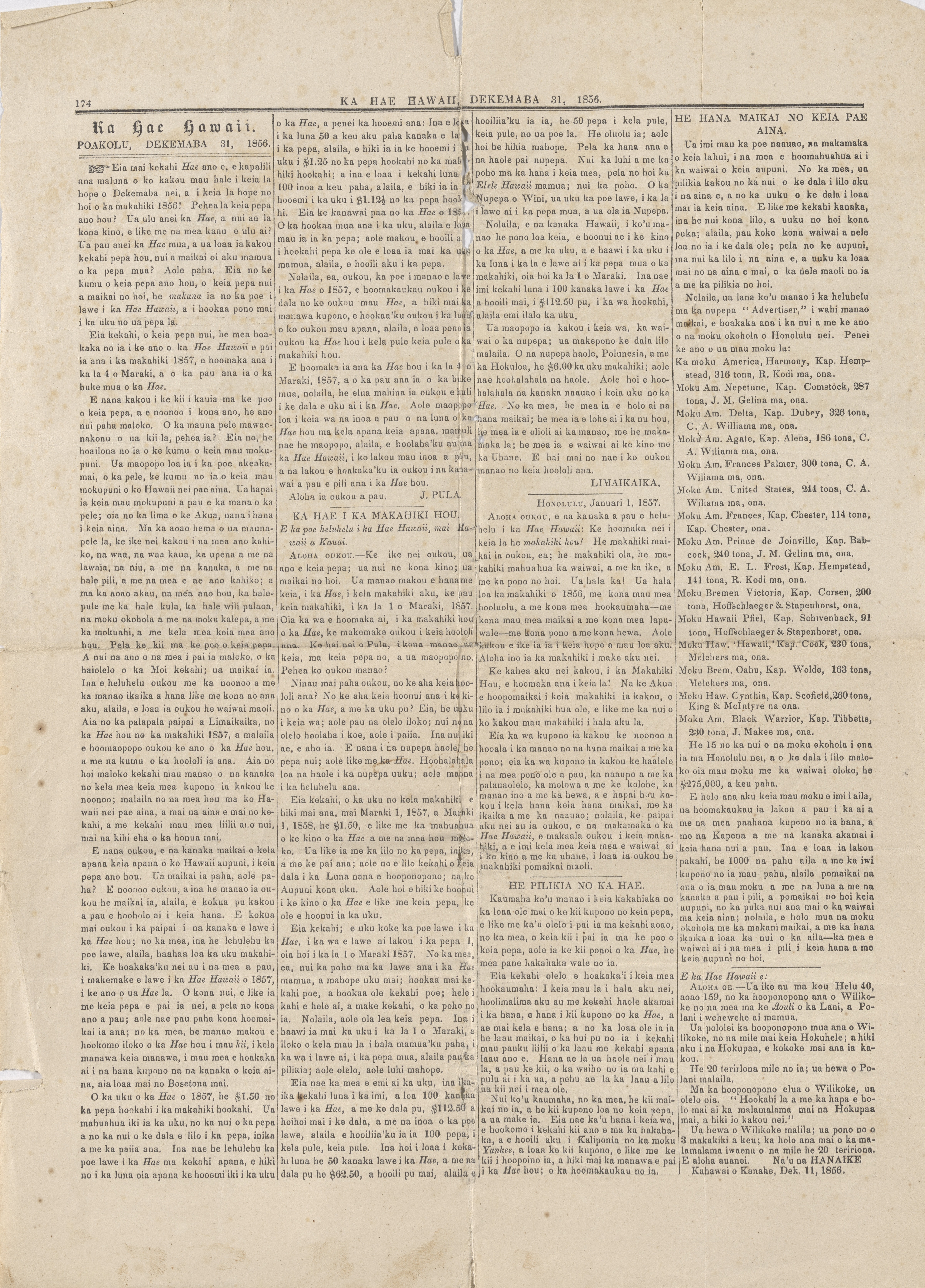