How Are We to Speak the Hawaiian Language Correctly.

The Hawaiian language is the speech of this people. The language of another people is a key to open and clarify the thoughts, the desires, and the privileges of all the people of that racial group.

In comparing Hawaiian to other languages of the world, it is seen that it is a more understandable language and because of this, it is quickly grasped by all who wish to learn it.

Our first ancestors arranged the Hawaiian language, corrected the way of speaking it, of expression, and of inquiring, with the greatest of skill. Because they were eager to speak well and accurately they interpreted and arranged their proper usage in the language and no one who is very capable of speaking correctly can do so without regard to the usages laid down by them.

By comparison, the language of a people is like a good tool. If the tool is given good care and kept sharp, it becomes a great help to the user, to give him success by facilitating his work. But if he does not take care of his tool, leaving it outside at times, walking on it, it will become ruined and lose its sharpness. It becomes a waste of time, a thing to wear out the strength of the user and the object made is bad to look at.

So also is it like a good road, that is kept clean; it is a benefit to all, but if stones, sticks, and trash are thrown on it, they all become obstructions, a hindrance to all who walk on that road.

So if we eliminate all that hampers our speaking our language properly, then we will be able to speak Hawaiian correctly.

It seems that there are many ways in which Hawaiian is being spoken today, but I shall mention four used by the youth of this race who speak the Hawaiian language of their ancestors very carelessly.

“He aha hoʻi kā iū [you]?” (What is it to you?) The correct way to say is, “He aha hoʻi kāu?” This is an expression of annoyance uttered when two are arguing, that is its true import. It is a wish not to do as the other wants one to—but to Hawaiians, English is mixed with Hawaiian and used together.

Here is another word, “Kaia [tire] maoli au.” (How tired I am.) The correct way is, “Māluhiluhi maoli au,” or “ʻOʻopa maoli au.” Some people dislike the words ʻoʻopa, māloʻeloʻe, and māluhiluhi and use the Hawaiianized English word “kaea” for tired.

It is better to be patient in speaking your own language correctly than to add unsuitable words from the language of others. If the Hawaiian language has no word at all to call an object then it is well to Hawaiianize it, but if it does not lack a word, it is entirely useless to mix the language and make it incorrect to use. 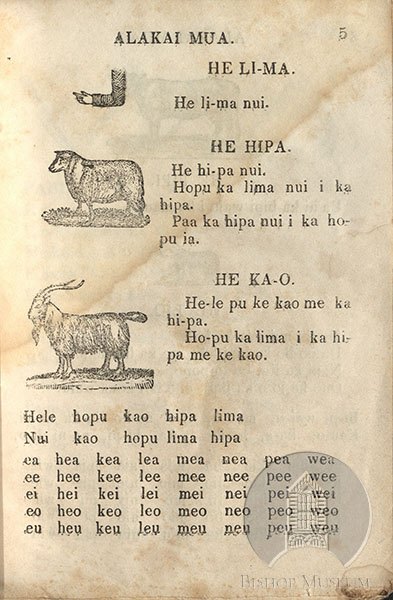 Image: Illustrated page from a school textbook, Alakai Mua no na Kamalii. It was published by the missionary press in Honolulu in 1854. Bishop Museum Archives. SP210513