150 years ago, William Charles Lunalilo became the first elected monarch of the Hawaiian Kingdom. Before the vote by the Legislative Assembly to determine the new monarch, which took place on the 8th of January 1873, there was an earlier election on the first day of that year. This election took place among the makaʻāinana, and the overwhelming favorite was Lunalilo, who was thereafter referred to as the people’s king.

In order to show the unanimity of the makaʻāinana by actually voting for His Highness Prince Wiliama C. Lunalilo for King of the Hawaiian Archipelago, we place below the total ballots cast on the 1st of January, 1873.

Those who signed for W. C. Lunalilo 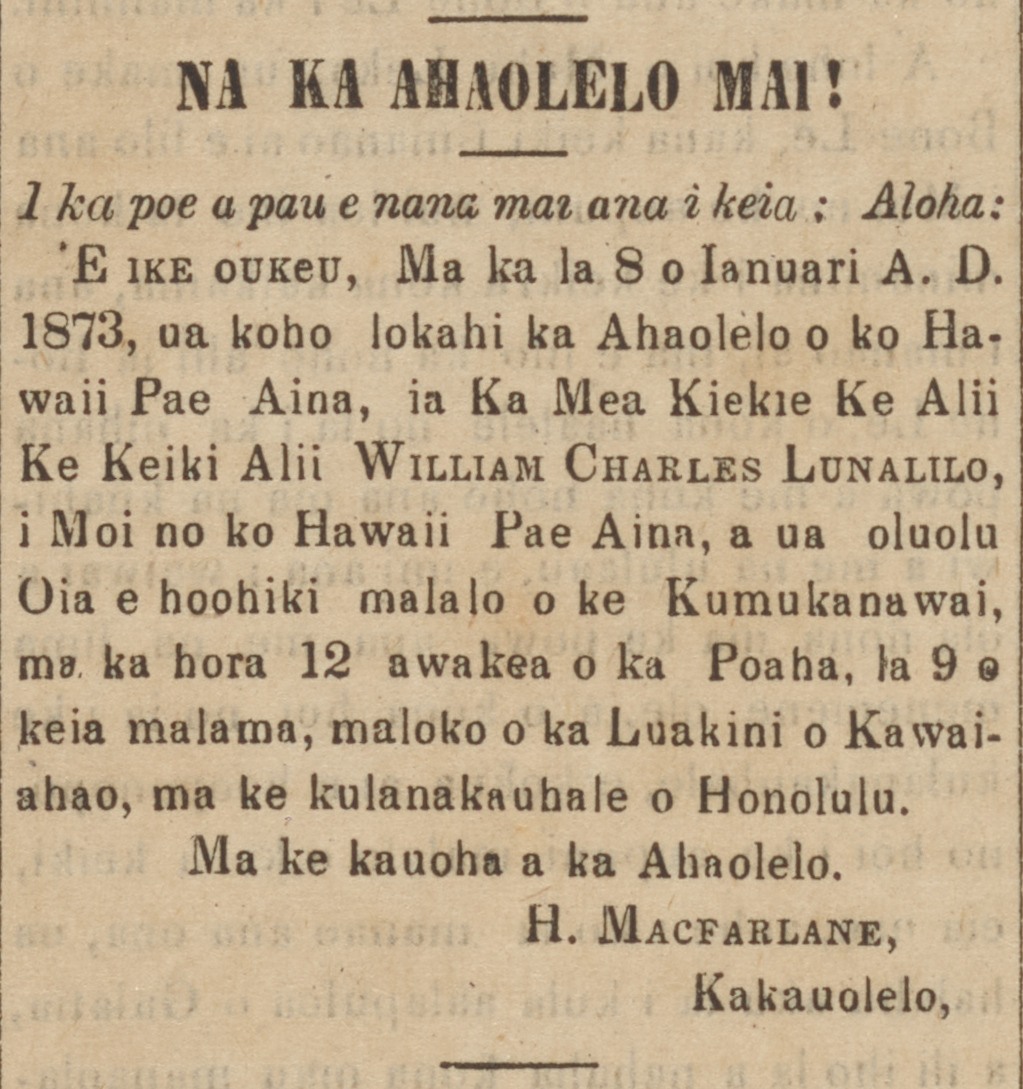 FROM THE LEGISLATIVE ASSEMBLY!

To all to whom these presents shall come, greeting:

KNOW YE, That the Legislative Assembly of the Hawaiian Islands has, on this 8th day of January, A. D. 1873, unanimously elected His Royal Highness Prince WILLIAM CHARLES LUNANILO, King of the Hawaiian Islands, and that he will be pleased to take the oath of office at 12 o’clock M., on Thursday the 9th inst., at Kawaiahaʻo Church, in the City of Honolulu.

Accession to the Throne of His Highness, The Aliʻi W. C. Lunalilo.

Before the noon hour, the grounds of the awe-inspiring Kawaiahaʻo Church was already filled with makaʻāinana, and they pushed their way into the church and stood. Because there was concern that the building would collapse, they were told earlier not the stomp their feet, “but when the King enters, give aloha with your mouths and applaud with your hands.”

At exactly noon, the makaʻāinana outside cheered when the King arrived amongst them. Not long thereafter, He entered, being escorted by the Chief Justice from the door along with the attendants of the late King.

When they entered, those in the church gave three cheers, and the King bowed with aloha. When he reached the high platform, he sat upon the throne and Rev. H. H. Parker called out to pray. During the prayer, the King stood up as well. At its conclusion the King sat down, and the Hon. D. Kalākaua immediately read the Certificate from the Legislative Assembly, by way of a committee of five saying that His Highness the Aliʻi W. C. Lunalilo was elected King of the Hawaiian Archipelago. His Hon. E. H. Allen read the English.

The Hon. D. Kalākaua proclaimed, “God save the King!” The assembly cheered.

Then the King read a royal address.

This is the first time in the history of this Kingdom that the Legislative Assembly has been convened for the purpose of electing a Sovereign, and I tender you my thanks for the cordial ananimity and good will which have characterized your proceedings. But before adverting to any considerations of duty or repsonsibility, it is becoming, as well as in accordance with the promptings of our hearts, to express our sorrow at the sudden death of the Illustrious Chief, whose successor I am, and whose Funeral Rites we are so soon to celebrate. The late King had decided traits of character. He was enterprising, labored to develop the resources of the country; and extended His protecting hand to the Hawaiian People.

While He was just to all His subjects, He was very naturally sensitive to the rights of the Hawaiians, and desirous of promoting every project which would advance their interests and increase their numbers.

I sympathized deeply with the late King on the subject of the gradual diminution of the people, and I need no assurances from you that all reasonable measures to prevent it will meet your cordial approval. While we mourn this sudden bereavement, let us learn from his illustrious example to be faithful and true to the Independence of the Kingdom, and anxious only to promote the general good.

This nation presents the most interesting example in history, of the social cooperation of the native and foreign races in the adminitration of its Government, and most happily too, in all the relations in life there exists a feeling which every good man will strive to promote.

Government may be said to enter upon a new era on the accession to the Throne of every Sovereign. It will be my earnest endeavor to sustain the character of the Government in its good repute with other nations, and in this connection it becomes us to cherish a cordial recollection of My lamented Predecessors, as of the disinterested and patriotic men who aided them in enrolling this Kingdom among the family of nations. It will be my endeavor and in this I shall have the aid of all men who are true friends of the Hawaiians, to sustain the charater of the Government transmitted to us. The commencement of my reign is auspicious; Our relations with foreign Governments are of the most friendly charcter, and I am satisfied will continue so, if We faithfully discharge our duty in conformity to the principles of justice and comity recognized among nations.

At home there is peace and a reasonable prosperity, which it will be my earnest endeavor to promote.

The Islands are capable of a far higher improvement than they have ever enjoyed. They have capacity enough to make a Kingdom which shall command the respect of other nations, as well as to give greater comfort and happiness to a far larger population.

We are fortunately placed by nature on the great Ocean Highway of Nations; the commerce of all flags should be attracted hither by the safety of our harbors, our abundant products, and the liberal laws and regulations of our ports. All legislation in the future, having in view the proper protection and promotion of our commercial relations, shall meet my hearty concurrence and approval.

There are circumstances attending my accession, which arouse within me a very lively sense of gratitude to the whole people. They have tendered me their loyalty and their cordial support, and I accept the trust imposed upon me, feeling confidence in the expression so spontaneously made.

May the blessing of Our Heavenly Father, without which there can be no permanent success, attend Our efforts to promote the best interest of the Government and people.2

At the conclusion of the speech above accompanied by cheering, the King read the speech below:

To the Hawaiian People:

Soon after the death of His Majesty Kamehameha V., whose loss the Nation mourns, I issued an address to the people, in which I stated that the Throne had become vacant, and without a successor appointed or proclaimed, and that I desired to submit my claim to their consideration and suffrages.

At numerous meetings held throughout the Islands, they have made known their views in a way most complimentary to myself, and the election by the Legislative Assembly is in response to the popular will.

But to accomplish these purposes, I must have your determined co-operation.

From this day I hope to see an increased effort on the part of all the people to make themselves independent.

History plainly teaches that no Nation can improve in population and wealth without industry and good morals.

It is a fact, which oppresses My heart that the Hawaiian population has been gradually diminishing for years and I appeal to every Hawaiian, whether here or at his quiet home, to arise in full strength and stay this desolation.

It can be done, but it will require the efforts of all who love Hawaiʻi nei.

Industry, temperance, and virtue, with a moral and religious education, will accomplish it.

Abandon all slothful habits, and strive for that standard of imporvement which gives such advance to other nations.

In My address, I alluded to some Constitutional Amendments which could properly and usefully be made. I shall take a legal course to accomplish this purpose.

It is evident that the popular expression, so recently made, has drawn King and People nearer together. We know, now, that WE sympathize in sentiment and opinion, and that WE are in earnest, and in mutual accord for the common good.

While My Government is a Constitutional Monarchy, it is an auspicious circumstance that the popular will is in accord with the legal bestowment of the Crown.

It promises a harmonious administration of public affairs, which will give ample protection to all men, and secure to them the enjoyment of liberty regulated by law, which is the greatest blessing which Government can bestow.3

At the conclusion of the address, the King made ready to turn back, and the Choir sang this song:

God Save the King!

After the proceedings at the church were over, the King returned to the Palace humbly by foot, greatly praised by his makaʻāinana.

1This English version of the proclamation is taken from the Pacific Commercial Advertiser, January 11, 1873, p. 3.

2The translation of this address to the Nobles and Representatives was taken from the Pacific Commercial Advertiser, January 11, 1873, p. 3.

3The translation of this address to his makaʻāinana was taken from the Pacific Commercial Advertiser, January 11, 1873, p. 3. 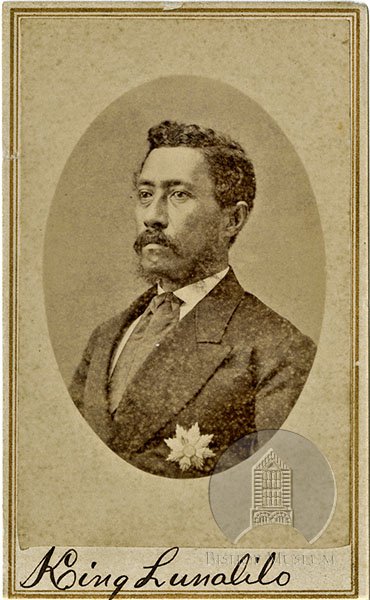 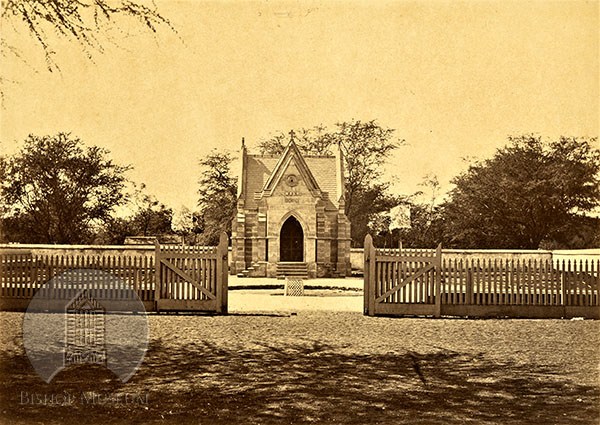