As earlier mentioned, photos began appearing in the Hawaiian language newspapers in 1900.

The very first photographs in Ka Nupepa Kuokoa were of the tragic fire that burned down much of Chinatown along with Kaumakapili Church (1/26/1900). The second occasion was for some unknown reason a photo of Japanese sumo wrestling (2/9/1900)! A few months later in June, there is a story on Abraham Gilbert Kaulukou giving a speech for his graduation from Oahu College (what is now Punahou School). The speech was given in English and translated for the readers of the Kuokoa.

It is important to note that Kuokoa newspaper was from early on a supporter of annexation. I wonder what Kaulukou would say if he were still living today. Perhaps after seeing what has been accomplished, and all the possibilities available, he would have had a change of heart. He was after all only 20 years old when he spoke these words below.

Abraham G. Kaulukou was born of the loins of Hon. J. L. Kaulukou and Mrs. Anna Kaulukou at the home of David Kaapa, Kīkīhale, Honolulu nei, on the 18th of August, 1880. When the boy was 6 months old, he was taken by his kupuna, that being H. W. Kawewehi to his home at Keauhou, Kona, Hawaiʻi. He was raised there until old enough to go to school, and he was enrolled by his kupuna into the day school there, under the instruction of Mr. Muller. He spent a year at that school, and then was taken by his kupuna to Oʻahu and enrolled into Kamehameha School. He was there for two years, and taken out and enrolled at ʻIolani School, under the instruction of His Lordship Bishop Willis. He resided there at that home of education. After being released from there, he was sent by his parents to Punahou College. It was at this last school that he exerted himself for four years, and this past month, he graduated with honors and much congratulations for the progress and knowledge he gained.

Find comfort, O fine parents, in the fruit of the good fortune of which you have been blessed by the Almighty Father.

Onward, young one, on the path that your honored father followed without going askew, whereby he affixed the cornerstone of learning upon your shoulders.

It is natural that we of Hawaiian blood should prefer to see a native government in Hawaiʻi:

But changes have come and the question involved are of the past. “Let the dead past bury its dead.” Hawaiian independence was impossible. It was a choice between Orientialism or Western civilization—between Japan and America.

We have become a part of the greatest nation on the face of the globe. We have its heritage by adoption, “It is ours to enjoy, ours to preserve, and ourst to transmit.”

As the favored Jew or Ethiopian could say in ancient days, “I am a Roman citizen,” so each one of us can say with greater pride, “I am an American citizen.”

As the years go by we shall feel even greater satisfaction for we shall perceive our advantages with clearer vision.

The completion of the Nicaragua canal will present boundless opportunities to these Islands, situated as they are at the crossroads of the Pacific. Trade, which is now diverted by natural barriers will come our way. The teeming populations of the Orient offer a vast field for enterprise which American manufacturers had already begun to occupy.

A new era was suddenly opened when Admiral Dewey “fired the shot heard round the world.”

The United States has taken no part in the partition of China, but had won an empire in the Far East greater than all the territory seized by the combined powers.

As soon as a settled government is assured in the Philippine Islands and the American flag floats over the whole group, a tremendous impetus will be given to the Oriental trade of America and the Hawaiian Islands must of necessity partake of the prosperity.

But while the future is great as far as material progress is concerned, it is still greater in the advancement of a higher civilization. No nation in the world has a higher regard for justice and freedom, purity and truth than the United States and we in Hawaiʻi are safe under the American flag.

The Hawaiian population in this group numbers about 40,000. The population of the United States is not far from 80,000,000—about one Hawaiian to 2000 Americans on the Mainland. And yet we are safe because that flag means liberty and justice.

This discrepancy in numbers shows us the folly of any attempt at an independent party here. It would not be a drop in the bucket.

Let there be no race distinctions ever drawn in Hawaiʻi.

Let the old cry, “Hawaiʻi for the Hawaiians” be replaced by the truer sentiment, “Hawaiians for Hawaiʻi.”

And let us altogether unite, in the determination to have honest government in Hawaiʻi nei. Let us be true citizens. Let us stand firm and fight our battles nobly “unshaken, unseduced and unterrified.”

Here are some of the earliest photos found in the Kuokoa. On the left, as they appear online, and on the right as they were digitized from an original copy of the paper. 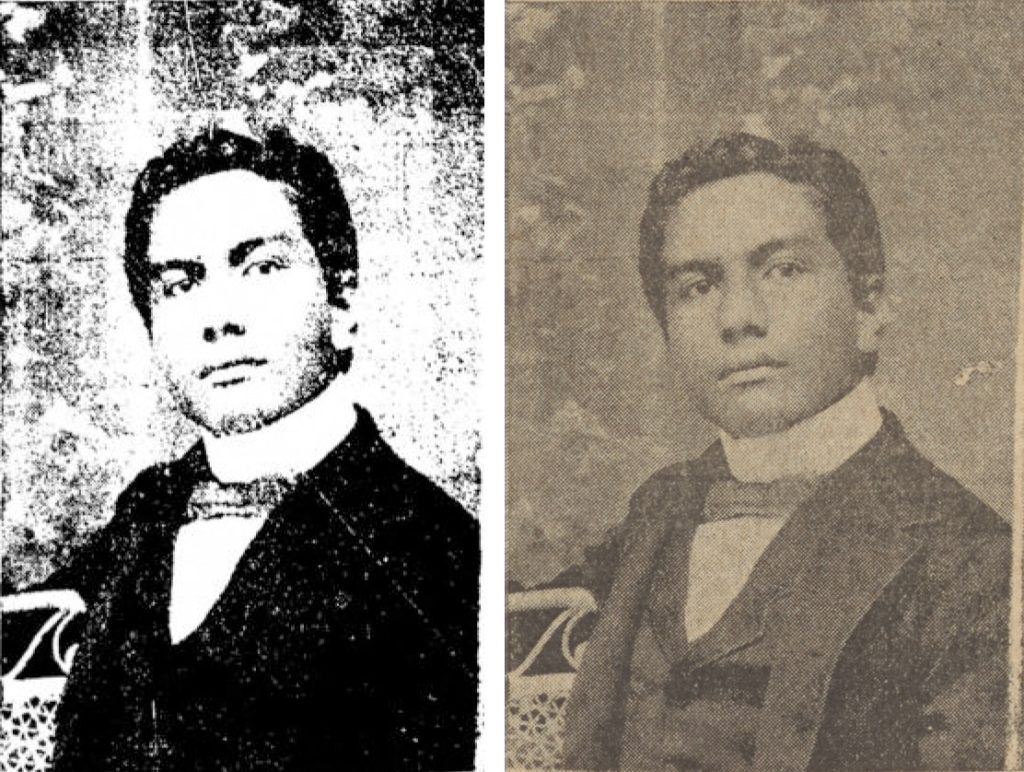