Hawaiʻi’s Own Royal Funeral, 100 Years Ago

Watching the coverage of all the ceremony accompanying the memorial of Queen Elizabeth’s passing reminded me of the passing of Jonah Kūhiō Kalanianaʻole a century ago.

The following is but one article in the Hawaiian language newspapers that describe the ceremonies held here for the passing of Prince Kalanianaʻole. The whole second section of Ka Nupepa Kuokoa of January 20, 1922 is not yet available online, and this article and many of the photos shown here come from this missing section. 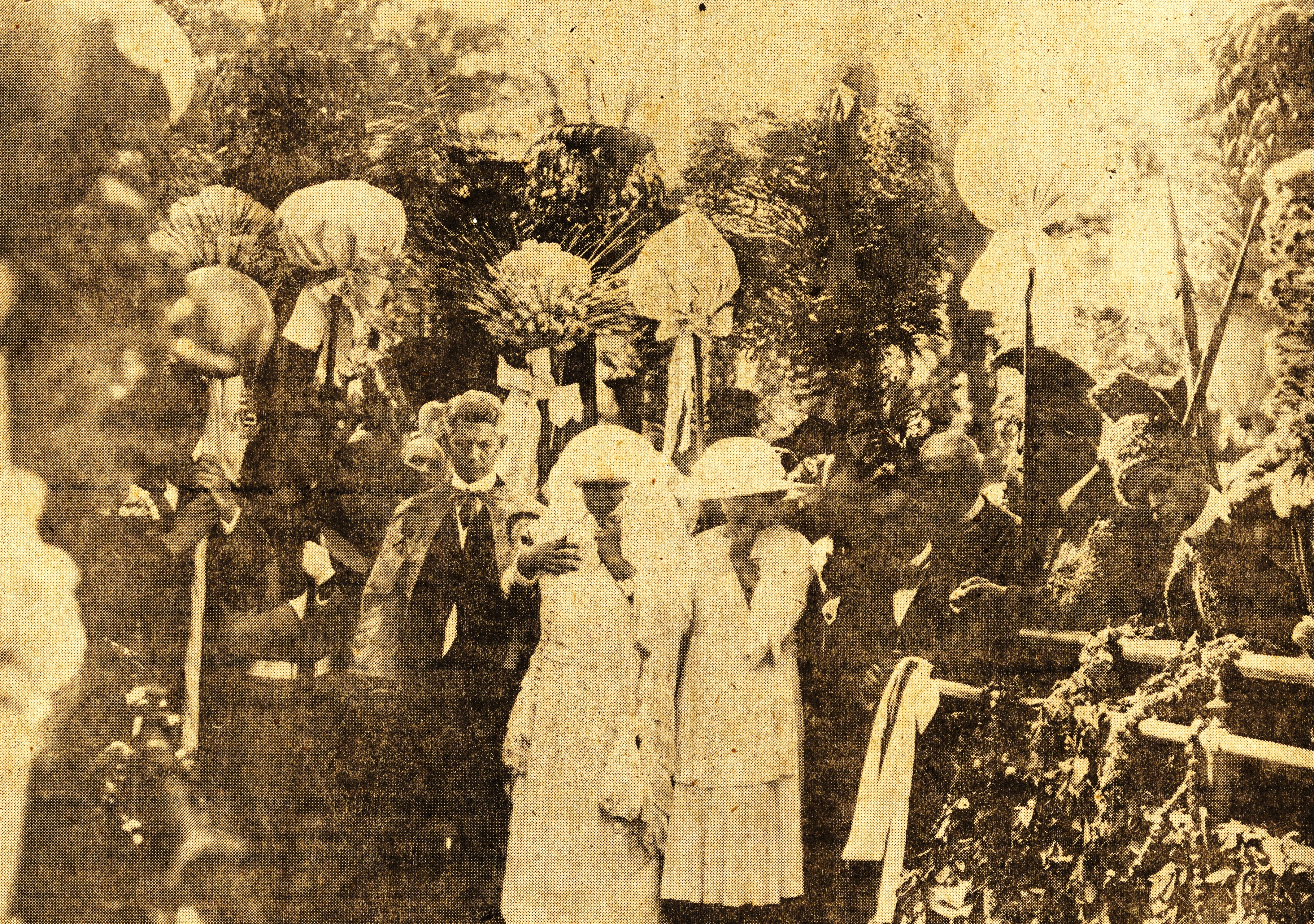 Image: A scene from the upland of the burial place of Prince Kalanianaʻole at Maunaʻala. Princess Kalanianaʻole held by John C. Lane and Princess Kapiʻolani, as they watch the coffin being lowered. Ka Nupepa Kuokoa, January 20, 1922, Mahele 2, p. 1.

THE PEOPLE SEE HIS FEATURES FOR A FINAL TIME

From the time the body of Prince Kalanianaʻole entered Kawaiahaʻo Church late at night on Saturday until the very last minutes before his body was taken to the palace, there was no time when the church was less than filled with makaʻāinana, from Hawaiians to haole as well. He was constantly watched over by the various Hawaiian and haole associations and the heads of government. It was as if in the history of Hawaiʻi, he was one of the native-born chiefs who had the very great affection and acclaim of the makaʻāinana, in them giving some time each night to stand guard, both night and day, from the time when the body entered Kawaiahaʻo until the body was taken midday this past Sunday to the crypt and burial cave of the royal Kalākaua lines at Maunaʻala.

The Last Viewing by the People

So that the people could view Prince Kalanianaʻole’s features for the last time, the doors of Kawaiahaʻo were open from 10 o’clock Saturday morning until 4 p. m., and from then until 10 that night was for the family. During these hours, Kawaiahaʻo remained packed. From the great entrance to the grounds on the ʻEwa side of Kawaiahaʻo to the large doors, there was a long line of makaʻāinana who stood patiently from the evening hours hoping to enter the church, but because it was packed full inside the church, the majority were kept outside, for there was no place inside for them to enter. It had already been filled, without any thought that there would be a shower that fell from 8 to 9 o’clock that night.

At exactly 10 o’clock on Saturday night is when the memorial service was held over the body of the deceased, and this was given mainly for Hawaiians, for it was conducted all in the Hawaiian language by Rev. Akaiko Akana, S. L. Desha, and William K. Poai. Yet there were many haole friends who also gathered at that time in the congregation. Below is the program for the night.

Rev. S. L. Desha spoke about some things pertaining to the life of J. K. Kalanianaʻole, the people’s Prince, matters of import and truthful things showing the prince’s humility, his ability to make friends, his conviction and faith in his beliefs, and his not holding grudges. He was an aliʻi who showed his true aloha for his people, and who worked for the good of Hawaiians until his slumber while in his youth.

He had three main ideas established upon those three topics among his many traits. The first, “Know ye not that there is a prince and a great man fallen this day in Israel?” II Samuel 3:38. The second: The mourning of King David for Jonathan, his friend, the son of Saul, the king. And the third: The words spoken by Jesus to his disciples of Nathanael, “Behold an Israelite indeed, in whom is no guile!”

Overall, what was introduced by Rev. S. L. Desha were all the good traits of Prince Kalanianaʻole as he knew and understood of him, that being Kalanianaʻole’s humility, his way of making friends, his genuine aloha, his firm beliefs, his aloha for his people, his not returning evil for evil cursed upon him, and not holding a grudge. He was an aliʻi who had aloha for native Hawaiians, as he heard directly from the prince; the strong desire of Kalanianaʻole should he live a long life, was to see that Hawaiians lived successfully upon homestead lands, and he himself wanted to go back and live upon those lands as one with Hawaiians on those lands. Aloha for those words of the aliʻi!

After the closing of the memorial service, and according to the wishes of Princess Kalanianaʻole, the entire assembly was asked to exit the church and let the princess be alone with the body of her beloved for her final mourning. Those were very emotional minutes where the crowd could not hold back their tears when they heard her let go great tears of intense aloha for her companion, her fellow traveler for many years gone by together, and it was death that undid their loving bond.

Taken to the Palace

At 11:37 on that Saturday night, the preparations to bring the body to the palace began. The soldiers were lined up ready outside of Kawaiahaʻo Church, and so too were the Daughters and Sons of Hawaiian Warriors [ʻAhahui Pūkaua], the Royal Order of Kamehameha [ʻAhahui Kamehameha], the Hale o nā Aliʻi, and some other associations, along with the boys of Kamehameha School carrying torches. A few minutes before 12 o’clock, the marching of all of the associations began, along with the kāhili bearers, the pallbearers, accompanied by a great number of makaʻāinana behind the hearse. There was no whispering heard; there was only the rumbling of footsteps. On each side of the road on which the procession to the palace took, there were stationed national guards to maintain the peace.

Arrival of the Body to the Palace

Shortly after 12:00 that night, the body arrived at the palace; given by Governor W. R. Farrington and his subordinates were all the honors in welcoming the body of the prince to the palace. When it was time to bring the body of the prince to the palace, and while the procession waited in preparation to proceed, five or six torches were lit, and the light outside of Kawaiahaʻo was like that of the day, and the photographers went at work taking photos of the line of of marchers all ready to move.

It is one of the very beautiful images to see from that night; everyone was in plain sight; and at the same time, heard were the voices performing oli and mele intimately related to the aliʻi, from some mothers.

There was no whispering nor talking that was heard during the procession, only the rumbling of footsteps, and the entire procession marched bare headed.

When the procession reached the palace, Governor W. R. Farrington and Mrs. Farrington; the secretary of the Territory, R. C. Brown and Mrs. Brown; Colonel W. D. Potter, adjutant general of the Territory; Captain Beckley and Colonel Smoot of the H. N. G. [Hawaiʻi National Guards] stood ready at the door of the palace to welcome the body. The body was carried into the Throne Room of the palace, accompanied by Rev. John D. La Mothe, the Anglican Bishop. The throne room was decorated and prepared to welcome the last aliʻi in the royal line of Kalākaua. A service was held, and the prayer of the minister appealed to the heavenly power, asking that the heavy hearts be lightened of the Princess Kalanianaʻole and everyone whose hearts were grieving because of their aloha for the one who departed this life.

While the minister was giving words of prayer to the Almighty, the kāhili bearers stood in wait in the hall, and the room during that time was hushed save for the voice of the minister.

After the Bishop’s prayer was done, the coffin in which was the body was placed into the prepared koa casket, and this was weighty work, for the outer coffin and the new casket together weighed a ton and a half. The Royal Order of Kamehameha was responsible for the arrangements from when the body was taken from Kawaiahaʻo to the room in the palace.

After this was over, the widow princess returned to her position at the head of the casket, and thereafter the watching over the body resumed just as it had been done each day of the week when the body was placed in Kawaiahaʻo.

Just as the aliʻi who passed on were placed in the crown room, so too was Kalanianaʻole, until he was carried to the crypt at Maunaʻala, on midday this Sunday.

Image: The funerary procession of Prince Kalanianaʻole heading from the palace for the uplands of the cemetery of the aliʻi at Maunaʻala. Some Hawaiian associations are seen in their full uniform in a section of the procession. Ka Nupepa Kuokoa, January 20, 1922, Mahele 2, p. 4. 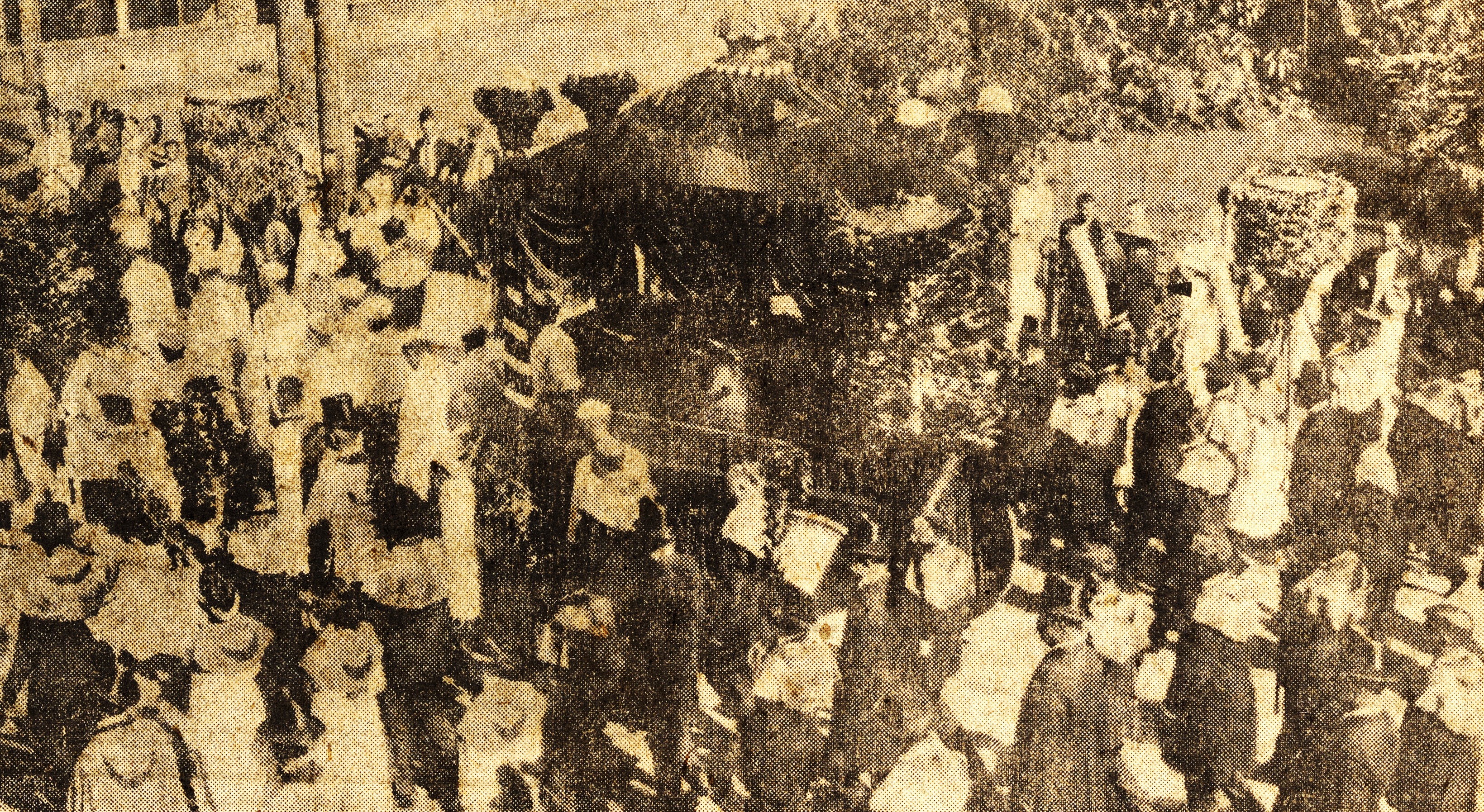 Image: A photo of the hearse carrying Prince Kalanianaʻole, pulled by the Poʻolā numbering three hundred, as they were preparing to leave from within the palace grounds for the uplands of Maʻemaʻe. Ka Nupepa Kuokoa, January 20, 1922, Mahele 2, p. 4.

Image: A photo of the Royal Order of Kamehameha, the Association that Prince Jonah Kūhiō Kalanianaʻole presided over as Aliʻi ʻAimoku from its inception in 1903 until he left this life. The Prince is seen standing in the middle of the front line wearing the full regalia of the association. Ka Nupepa Kuokoa, January 20, 1922, p. 5.