The Hawaiian Islands expand over time. This article is a translation of the article, “Islands Comprising the Hawaiian Republic,” which appears the following year in Thomas Thrum’s Hawaiian Almanac and Annual for 1898. It describes the circumstances of this growth. See also footnotes for the text to related English newspaper articles.

Beyond the islands of Hawaiʻi, Maui, Oʻahu, Kauaʻi, Lānaʻi, Molokaʻi, Kahoʻolawe, Niʻihau, Lehua, and Kaula, which are usually seen as the islands included in what comes under the joint name, “Kō Hawaiʻi Pae ʻĀina,” there are also other islands which have joined that group.

The island of Nihoa (Bird Island), became part of Hawaiʻi nei in the year 1822. This “annexation” was undertaken by Kuhina Kaʻahumanu. Keolaloa (Captain William Sumner) was the caption of the ship sent to accomplish this.

The island of Laysan became a district of Hawaiʻi on the 1st of May, 1857, and on the 10th of that same year [sic], Lysiansky Island was annexed to the Nation of Kamehameha by Captain John Paty (Keoni Peti).1

On the 15th of April, 1862, Palmyra Island was annexed by Captain Zenas Bent, and it was proclaimed a Hawaiian territory, during the reign of Kamehameha IV, as per the Government announcement published in the Polynesian newspaper on June 21, 1862.2

On September 20, 1886, the island of Papapa (Ocean Island) accrued to Hawaiʻi nei by way of the National proclamation of Colonel James Harbottle Boyd who was empowered to carry out that task during the reign of Kalākaua.3

The island of Necker was annexed the the Nation of Hawaiʻi on the 27th of May, 1894, by Captain James Anderson King on behalf of the Hawaiian Nation.4

The low island called “French Frigate Shoal,” is the last island annexed to Hawaiʻi, on the 13th of July, 1895. Captain James Anderson King carried out this annexation.5

It has been said that accrued to Hawaiʻi were Gardner Island, Mara or Moro Reef, Pearl and Hermes Reef, Gambia Bank, and Johnston Island (or perhaps Cornwallis).

Within the archives of the Office of Foreign Affairs can be found treaty made between the Hon. Charles St. Julien, the Commissioner and Political and Commercial Agent of His Majesty the King of the Hawaiian Islands, and John Webster, Esq., the Sovereign Chief and Proprietor of the group of islands known as Stewart’s Islands (near the Solomon Islands), and per those treaties, they were annexed by the Hawaiian Nation should the King consent. These are the names of those islands: Ihikaiana, Te Parena, Taore, Matua Awi and Matua Ivoto.

This treaty was made in Sydney (Kikane) on the 10th of February, 1855, but there are no reports speaking of its ratification.

Bet it known to all whom it may concern—That by orders from his Majesty Kamehameha IV., Captain John Paty, commanding the Hawaiian schooner “Manuokawai,” on the 1st of May, 1857, landed and took possession, with the usual formalities, of the Island of Laysan, situated in Latitude 25° 44ʹ, and Longitude West of Greenwich 171° 44ʹ.

And that on the 10th of May, 1857, by orders of his Majesty, Captain John Paty landed and took possession, with the usual formalities, of the Island of Liscanskey situated in N. Latitude 26° 00ʹ 30ʺ, and Longitude West from Greenwich 173° 46ʹ.

2Proclamation—Whereas, on the fifteenth day of April, 1862, Palmyra Island, in latitude 5° 50ʹ North, and longitude 161° 53ʹ West, was taken possession of, with the usual formalities, by Captain Zenas Bent, he being duly authorized to do so, in the name of Kamehameha IV., King of the Hawaiian Islands. Therefore, This is to give notice, that the said island, so taken possession of, is henceforth to be considered and respected as part of the Domain of the King of the Hawaiian Islands.

3I, Colonel James Harbottle Boyd, by the power in me vested as His Hawaiian Majesty’s Special Commissioner, do hereby take possession of this island—Ocean Island, or Moku Papapa—as a portion of His Majesty’s Royal domain.

We, the undersigned, were present and witnessed the above.

Done at Necker Island this 27th day of May, in the year of our Lord one thousand, eight hundred and ninety-four.

Done at French Frigate Shoal this 13th day of July, in the year of our Lord one thousand eight hundred and ninety-five. 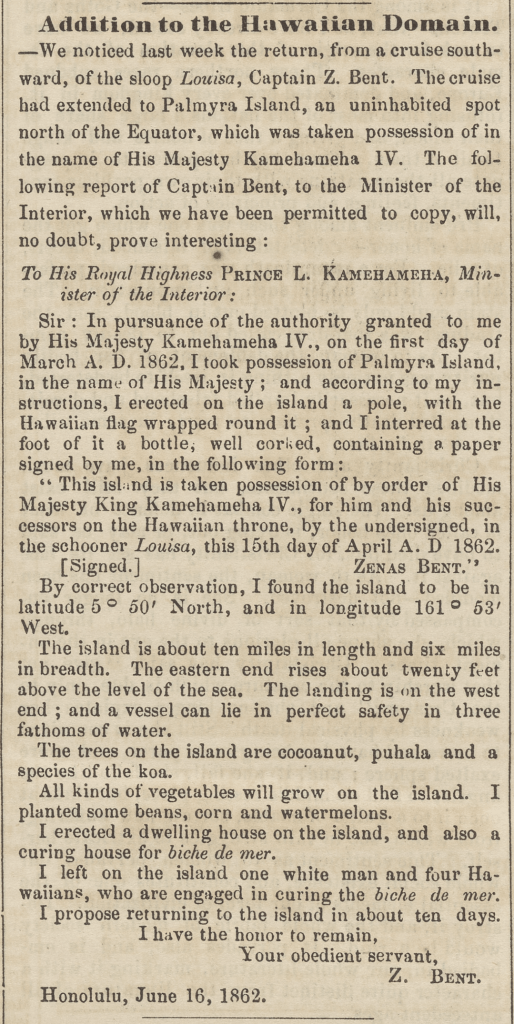 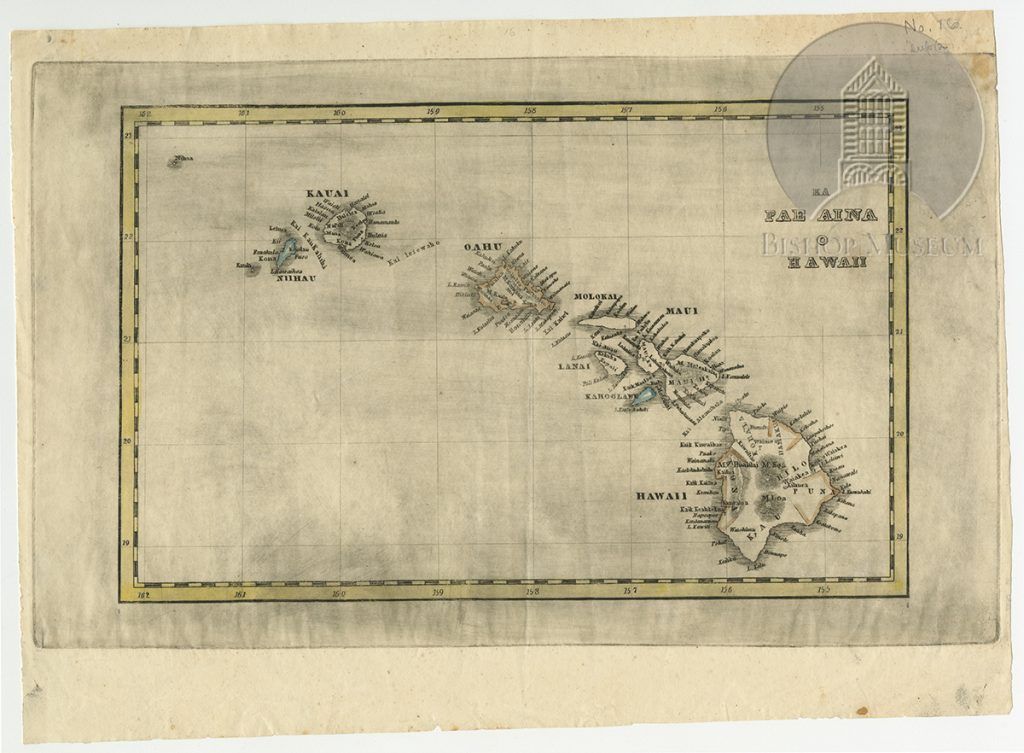