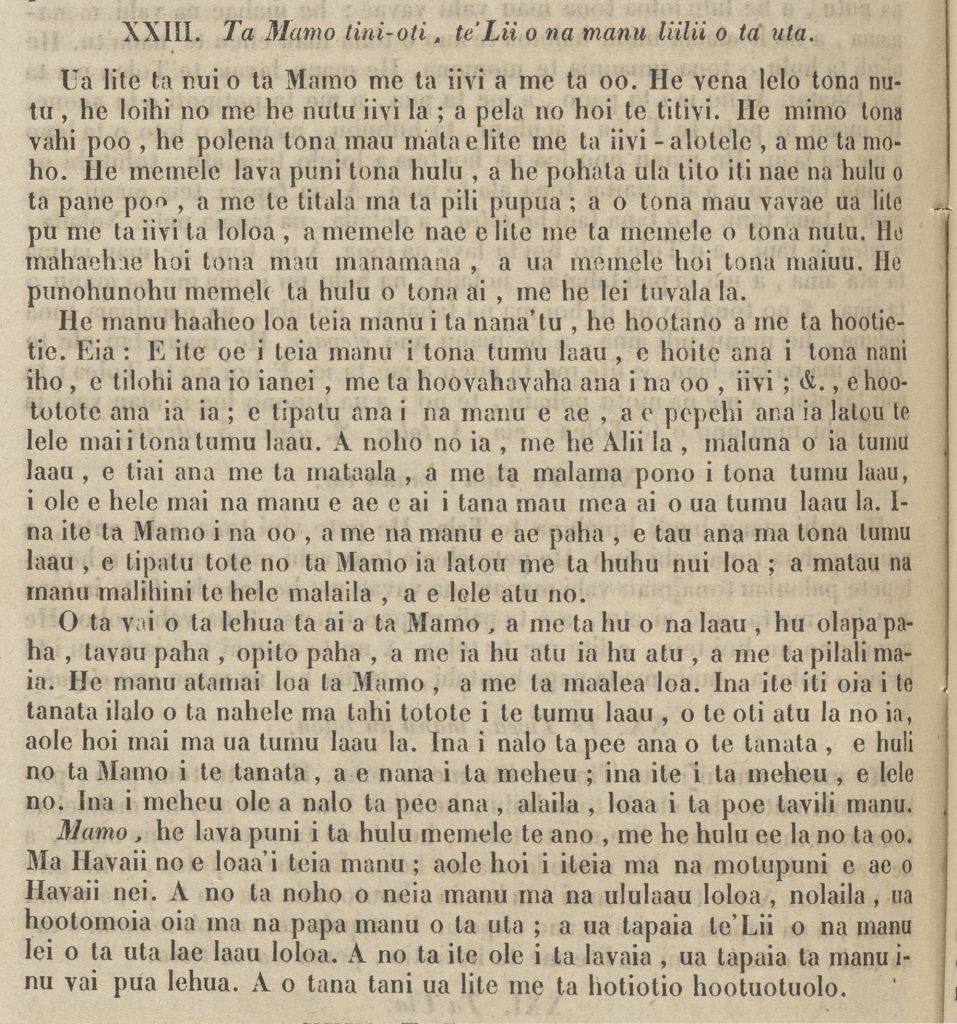 The mamo is as large as the ʻiʻiwi and the ʻōʻō. Its beak is reddish yellow, it is long like that of an ʻiʻiwi and is curved in the same way. Its head is held upright; its eyes a yellowish color like those of the ʻiʻiwi alokele’s or moho. Its feathers are a bright yellow; there is a small reddish spot on the top of the head and on the rump near the tail. Its legs are as long as those of an ʻiʻiwi bird, and yellow like the color of its beak. Its toes are divided and its claws are yellow. The feathers of the neck are yellow and fluffy and it looks as though it is wearing a lei.

This bird has a proud appearance, as though with pride and hautiness. Say, if you should see it up in a tree, showing off its beauty, glancing about here and there in contempt of the ʻōʻō, ʻiʻiwi and others that approach it, it will send them away and beat them off when they flit about on its tree. It sits there on the food that is on the tree. When the mamo spies an ʻōʻō or any other bird on its tree, it will send the other away with great anger. Strange birds are afraid to go near and fly off elsewhere.

The honey of the lehua blossom is the mamo’s food and also the gum of trees, such as the gum of the ʻōlapa, kāwaʻu, ʻōpiko, and others and the honey of banana blossoms. The mamo is a very clever bird and very cunning. If it spies a man in the undergrowths under a tree, it vanishes and does not return to that tree. If the man hides himself completely, the mamo will seek him and look for his foot prints. If it sees the foot prints, it will fly off. If there is no foot print and the man is well concealed, then it will be caught by the bird catchers.

Mamo means a handsome all yellow bird like the under wing feathers of the ʻōʻō. This bird is found only on Hawaiʻi and not on any other island of the group. Because this bird dwells in a forest of tall trees, it is numbered among the land birds and is called the chief of birds of the tall upland forests, whose feathers are used for lei making. Because it knows nothing of fishing, it is called a bird tht sucks honey of the lehua blossoms. Its cry is a whistling and warbling. 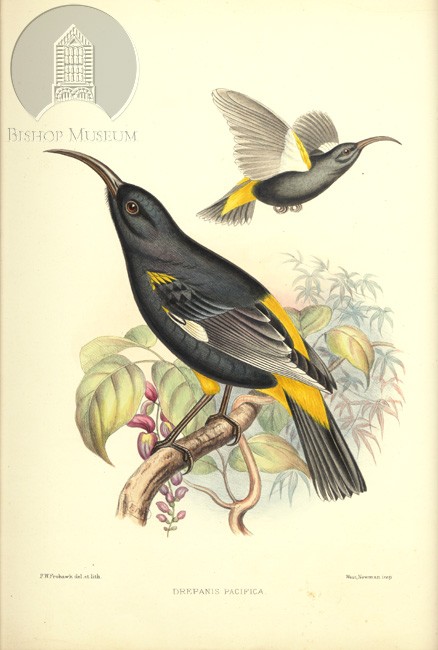