Newspapers were used to record traditions, like how to grow different plants, how to fish for different fishes, and how sicknesses were treated.

While the following article may not show how to do any hei (string figure), or give the words to any of the mele, it does encourage people to pay attention to them and to think about their importance. This might be the reason people write in to the newspapers with more stories about hei thereafter.

Many people are in search of the old history of Hawaiʻi nei and the way of life of its people, like what has been done with the people of America, Europe, and Asia, and while searching for this history, there has not been a lack in finding important things, and looking at these things will be greatly beneficial. Judge Dickey of Kauai has found a new path to this study, a path not utilized before in Hawaii nei. He is learning hei (string figures), and is collecting the old names and the mele that are available, and that go with these hei. He has a hundred or more of them.

Hei are something that is done all over the world, and most people know one or two. From what is known, there are but a few known by the people of Europe and Asia; the people of Africa know a bit more; and the Indians of America have much more, along with the people of the islands of the Pacific Ocean. There are two books on string figures, these being the string figures of the islands of Britain, the Indians of the Arctic, the Indians, and a few from the islands to the south of us. There is nothing written on the hei of Hawaiʻi nei, even if Hawaiʻi’s figures are most wonderful because of the mele which accompany them. Some are not difficult, however some are very troublesome because of the many transformations, and the different lines of mele that go along with each change. Some are very humorous without value, while some are for wooing, while others are for riddling. Knowing the way of life of the people of old, their tales, their history, and the lay of the land—this is what can be understood, the meanings and kaona (underlying meanings) of these hei. Perhaps the most widely memorized hei is called Hale Kumukaaha. However to this day, Judge Dickey has not gained clarity as to the true meaning and kaona of this hei.

Some figures done by the school children of Hawaiʻi perhaps do not originate in Hawaiʻi nei. The hei called “nā maka ʻeono” (six eyes) by children perhaps was not originated by Hawaiians. Currently there is no old Hawaiian found who can make this figure. Maybe it is a new hei or maybe one from a foreign land.

Some of the hei are associated with things used or carried out day to day, like the waʻa (canoe), the ʻupena (net), the ʻahamaka (hammock), the imu (underground oven), and the huewai (water gourd). Some are associated with animals and fish, like the honu (turtle), the moʻo (lizard), the manini, the ʻāweoweo, the hāpuʻu, or bird. Some hei are associated with the house like the kumukaaha structure, the loulu structure, and the paʻakai structure. There are a very few hei pertaining to body parts, like the piko of Kahoaliʻi and the breasts of Ne. There are many dealing with land and famous fishing shrines as well as men with god-like bodies. Kaʻuiki, probably for a good reason, is the most widely known figure. There is one hei for Wailua and it is seen in the attached illustration.

There is one very famous hei, but the only thing known of it by the oldsters of Hawaiʻi nei, are the beginning lines of the kau that goes with the hei, that being, “ʻO Kūhaupiʻo ka lā, ka lā i ke kula o Ahuʻena.”

A majority of the people who memorized the mele or kau along with the hei have died without teaching them to their children. There are so many other things that entertain the new generation, but this entertainment of times long ago is a thing of pride for the Hawaiian people. This skill shows intelligence in making the figures and associating it to this thing or that, and it is truly important that this old knowledge be kept. It would be good if someone reading this knows of some old Hawaiian who has a kau or mele memorized close at hand, one who is fond of mele and versed in hei, or one who knows hei, that he should write to Judge Dickey in Lihue, Kauai and tell him of what this person knows. There are many fine hei which the judge has heard of, however, he has not found someone now living who can show them to him. There is one that is associated with the net of Makaliʻi that J. S. Emerson saw in Hawaiʻi some years ago; there are also some associated with the story of Pele and Kamapuaʻa, the paddle o Māui, “haehae ka manu e Kānealoha,” and so forth. These are great and very valuable, and it is important that they be preserved without regard to its simplicity or difficulty. And it is perhaps something that will bring joy when witnessing it being done, or perhaps something exceedingly appalling.1

1The two photos appearing in the article are: (top) “Nā Maka ʻEono” made by Deborah Kaiwi of Waimea, Kauaʻi. (bottom) “Wailua Nui” made by Kini Ainaike of Kōloa, Kauaʻi. 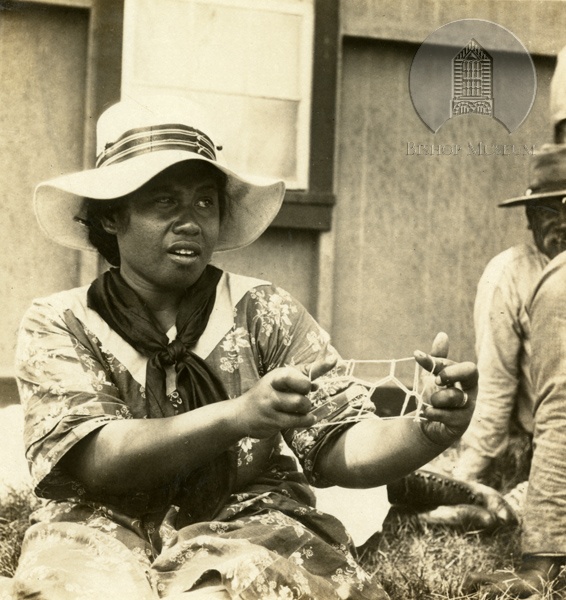