Dear Reader, Hawaiian language newspapers were a place for the recording of traditional knowledge: from genealogy, to mele, to place names, to wind and rain names for different lands. The following article by Z. P. Kalokuokamaile concerning canoes and their making was the first in a series that ran in Ka Nupepa Kuokoa from October 26, 1922 to February 15, 1923. It was translated by Mary Kawena Pukui and can be found in the Hawaiian Ethnographic Notes (HEN) collection at Bishop Museum.

Canoe making was one of the foremost arts and required skill and much thinking of the head. When the high and prominent chiefs of Nāpoʻopoʻo were living, Kamakau, Kahalau, Kanuha, Kekukahiko, and Kanihomauole the son of Kiʻilaweau; Kanihomauole decided to sail to Maui to get himself a canoe maker. The chief, Kanihomauole, sailed with some of his personal attendants.

They sailed and landed at Hāna, Maui. Kaʻahumanu was there at the time and was already married to Kamehameha. Her husband, Kamehameha had gone to Maui. It had been often heard that Kanihomauole was the son of Kiʻilaweau whose rank was higher than the conqueror Kamehameha’s; he was received with those who sailed with him, that is, Kahula, Kamaka, Naili Sr., Keaka, and Puuki.

The chiefess asked, “What is this journey for?” Chief Kanihomauole answered, “I came to seek a canoe maker and I knew that I could obtain a canoe building expert (kahuna kālai waʻa) through you two.” “Yes, you shall have one. Remain with me until my father Keʻeaumoku returns with his son-in-law Kamehameha. They are arriving tomorrow.” They decided to wait and spend the night there. The men who came were made much of by the natives.

The next day came and toward evening they saw the canoes of the chiefs and the canoes of those who accompanied them. They were asked why they returned so late in the evening and they said that some of the canoes had gone to get the chiefs, Keʻeaumoku and Kamehameha. As the canoes were well supplied with food, the chief’s canoe went ashore at Lahaina, for Hoapili, younger brother of Kepookalani, who was living there with his wife, Liliha Kaheiheimālie. After the chiefs had greeted each other, the canoes of the chiefs and those of the attendants turned back. The food was placed on the canoes that followed behind. When the chiefs, Keʻeaumoku and Kamehameha the conqueror arrived, these chiefs of high rank met with their relative (literally “grandson”) Kanihomauole, the son of Kiʻilaweau. The chiefs inquired, “What is it that has brought our relative on this journey?” “I have come to get me a canoe making expert.” The chiefs answered, “What do you want one for? If you desire some canoes, come and look at all of these canoes and then select some for yourself.”

“This is the idea which brought me here. I want you two to give me a canoe making expert. Because Kanihomauole was so set on it, the chief, Kamehameha sent a man to seek Panila, the great-grandfather of Senator George Panila Kamauoha, and Panila was found. [The messenger said,] “The chief, Kamehameha sent for you to go to him at once and hear what he has to say.” Panila consented and the two came into the presence of Kamehameha.

Kamehameha said, “Panila, you go to Hawaiʻi with the chief, Kanihomauole, and you two are to dwell at Nāpoʻopoʻo. What do you think of it?” “What seems wise to the chief, is wise for me.” “All right, you are to become a canoe making expert for Chief Kanihomauole.”

They were to depart the next morning and all of Panila’s family sailed with Kanihomauole from Maui for Hawaiʻi. A canoe from Maui assisted them.

When they arrived at Nāpoʻopoʻo, Panila became a great favorite and became the head canoe expert. Because the chief was not satisfied with one, he went to seek another expert and found one living at Moaʻula in Kaʻū, named Kanoio.

He was brought back by Kanihomauole. [The chief] returned to Kona for he had found what he went for. He had gone to seek a canoe making expert. This was a trip with a large company for they had expected to go as far as Puna and on to Hilo. There were about forty men and women who went. They believed that by going with chiefs, they would never lack poi and fish and it was so, for they had no lack of food until they got home again. There was an abundance of poi, fish, and pork. Half of the company went back but the other half remained, after finding husbands or wives. The chief, Kanihomauole had not told any of them that he was seeking a canoe making expert.

Kanihomauole and Kanoio went to Nāpoʻopoʻo to live. I never saw Panila as he was among the very old people but I knew his son, Palikauoha. He was an elderly man then but there was none to equal him in skill.

Palikauoha trained many and among the pupils that had completed their courses was the grandfather of Mary K. S. L. Desha, who was an expert in hewing out and adding on the parts of a canoe.

Adding on the parts was once a difficult task but this skilled man sought a better way with such success that adding the parts was an easy thing after all. My father had learned completely in the things taught him by his instructor. I used to go up sometimes with these experts who were trained in canoe making. There were two of us, young men who are now old, John Au and I. 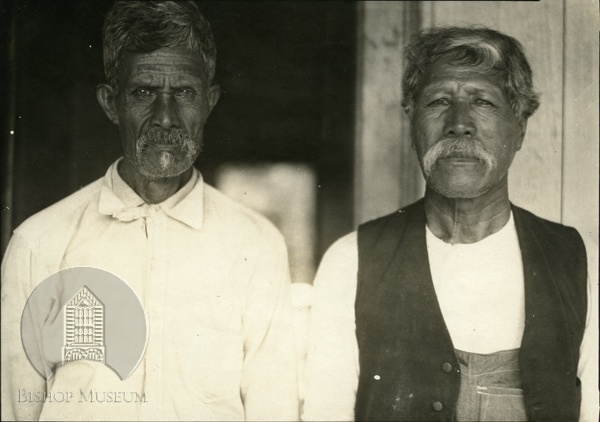 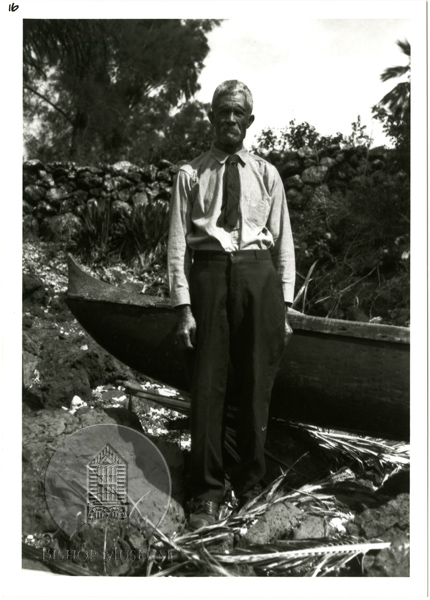