We found the final issue of Ka Nupepa Kuokoa!

Aloha Nūhou Monday! While continuing to catalog the Hawaiian language newspapers in the Bishop Museum Library & Archives, we discovered a copy of the very last issue of Ka Nupepa Kuokoa! It is not online. The Kuokoa ran weekly for 65 years and while 138 entire issues are not available online, finding the final issue was exciting.

Its four pages contain the usual coverage—crime reports; foreign stories; an obituary (for Cephas Makaeha Lawelawe); a report on the many arrests made of people extracting teeth without a license; a description of the 50th birthday celebration for George Kukapu Kane1; local and foreign news; a list of births (son of Mr. and Mrs. Samuel K. Crowell, son of Mr. and Mrs. John I. Makaiwi, and son of Mr. and Mrs. David V. Kahalewai Ke), a marriage (Noa Kema and Mrs. Alice Kapaona Noa), and deaths (Mrs. Julia P. Karratti, Mrs. David Hikalea, Frank P. Kahapea, and Ane Puleloa [Annie Puleloa]); as well as the continuation of Mokumaia’s telling of the story of Aukelenuiaiku (to have been continued).

Among the pages of that December 29, 1927 issue, there appears commentary on it being the end of the Kuokoa. The following announcement by Lorrin A. Thurston runs right down the center of the first page. In it, he asserts that the move away from the Hawaiian language (or other languages) to English is progress.

Looking back 95 years later, what would you say to Thurston?

Pertaining to the Ending of the Ka Nupepa Kuokoa

(By Lorrin A. Thurston, President of the Advertiser Publishing Co., Ltd.)

It is my sorrowful duty to announce the passing of the Kuokoa, a newspaper printed in the Hawaiian language—with one exception, that of The Advertiser—the oldest general newspaper printed in Hawaii, it having been founded in 1861. It is therefore, older than most of the people who will read this.

The Kuokoa has passed through many ownerships during its career. It became the property of The Advertiser Publishing Company before I was connected with the latter, in 1898.

For years it had a circulation unequalled by any other newspaper published in Hawaii.

Until a few years ago it was a more profitable publication than was The Advertiser.

Its circulation, has, however, gradually crawled down the scale, until, during the past three years its financial showing has changed from the credit to the debit side of the ledger, and, during the year 1927, it has become “the most expensive luxury” on The Advertiser Publishing Company’s list of enterprises, for its account shows a loss, in the past year, of over four thousand dollars.

It is always with regret that one loses an old friend. Moreover, it has been a source of personal pleasure and pride to me, that we were furnishing to the Hawaiian people practically their only contact with the news of the islands and of the world, and furnishing them with current literature, which, with a few minor exceptions, was the sole literary source of enjoyment of some thousands of native Hawaiians.

However, the passing of the Kuokoa is not a sign of decadence but of progress. It is not evidence of the slipping of the Hawaiians, but, on the whole, of their most substantial advance.

The newspapers published in Chinese, which, in the days when Sun Yat-sen, the great liberator of China, was a youth in Hawaii, were in the full tide of their strength and circulation, are now in a desperate state, for the same reason.

Several vigorous and prosperous Japanese newspapers are illustrating the same condition of paradoxical decline and progress. They are meeting the situation by adding first a page, then two, three and four pages daily of English to their issues; and they have added English writers to their staffs.

The reason is that the younger and coming generation in Hawaii, of all nationalities is, or is rapidly becoming, an English reading and speaking population.

But few of our citizens of Portuguese ancestry are immigrants. The overwhelming bulk of them are either Hawaiian born, or came here so young that their memories and education are purely Hawaiian, and therefore American.

Practically the same is the case with the Chinese. There are a larger number of Japanese immigrants in the Territory, and therefore, there are a larger number of this nationality to whom newspapers printed in Japanese are a necessity. But the younger generation of American citizens of Japanese ancestry have been born and developed under an American environment, and are, without an exception, receiving an English education.

Their contact with the community and the world is chiefly through the English language and the newspapers printed in English.

Hawaii is developing and progressing in all directions, and in no direction more so than its knowledge and patronage of English speaking newspapers.

And the people of Hawaii are to be congratulated that this is so, for what an immense increase of knowledge; what a boundless expansion of opportunity comes to those who have the great storehouse of English literature and current publications opened to them, in place of the restricted literature and narrow boundary of the several other languages which are passing and for which the English language is being substituted.

My heart goes out in sympathy to the comparatively few old time Hawaiians who have had the misfortune not to be educated in the use of the English language and whose touch with current news and literature will, therefore, be restricted by the passing of the Kuokoa, but I am happy to say that they will not entirely be cut off from the broadening influence of a current newspaper, for Stephen L. Desha still publishes in Hawaiian a small paper, in Hilo—“The Hoku,” or Star. I have written to Mr. Desha, telling him of the fate of the Kuokoa and tendered to him the free use of our subscription list to the Kuokoa, with the suggestion that he send a copy of his paper to each of said subscribers and give them the opportunity of becoming subscribers to the Hoku.

I hope that Mr. Desha will take advantage of this suggestion, and that, for many years, he may continue to cater to the literary needs of the old time Hawaiians, so long as they need it.

To both Mr. Desha and the Hawaiian old timers I say, “Aloha! May you live long and prosper!”

To all subscribers who have paid for the Kuokoa in advance for a period beyond next week’s issue of the Kuokoa, The Advertiser Company will do either one of three alternative propositions:

ONE. The Advertiser Company will refund to the subscriber the amount of the credit; or,

TWO. At the option of the subscriber, pay it to Mr. Desha to apply on a subscription to the Hoku; or,

THREE. It will apply it toward a subscription to the Sunday Advertiser, which costs 35 cents a month, or $4 for the year.

Write and tell us which you want.

1George Kukapu Kane, friend of the editor of the Hilo newspaper Hoku o Hawaii Stephen Langhern Desha, went by the penname “Na Iliili Hanau,” and was a correspondent for that publication. 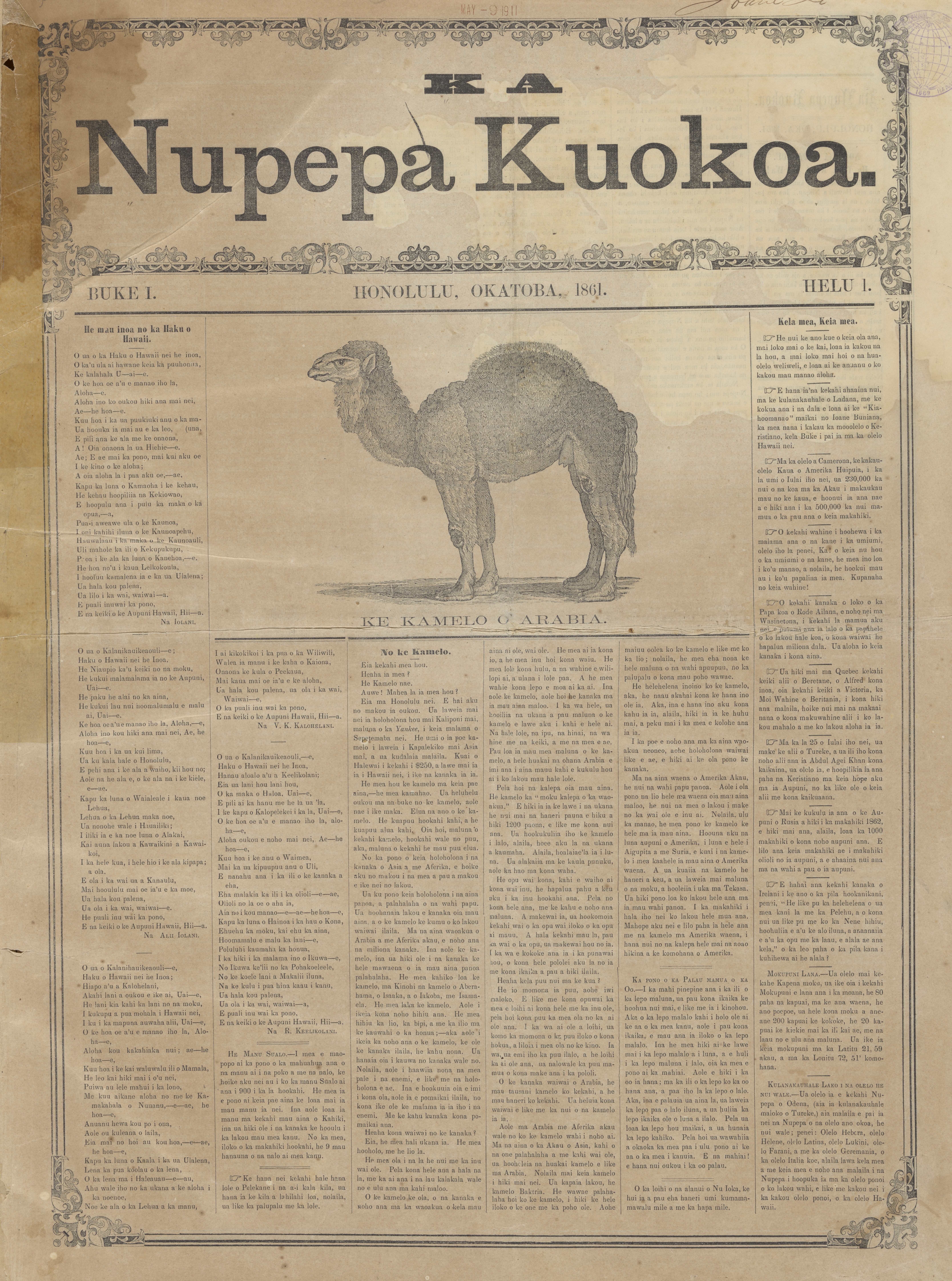 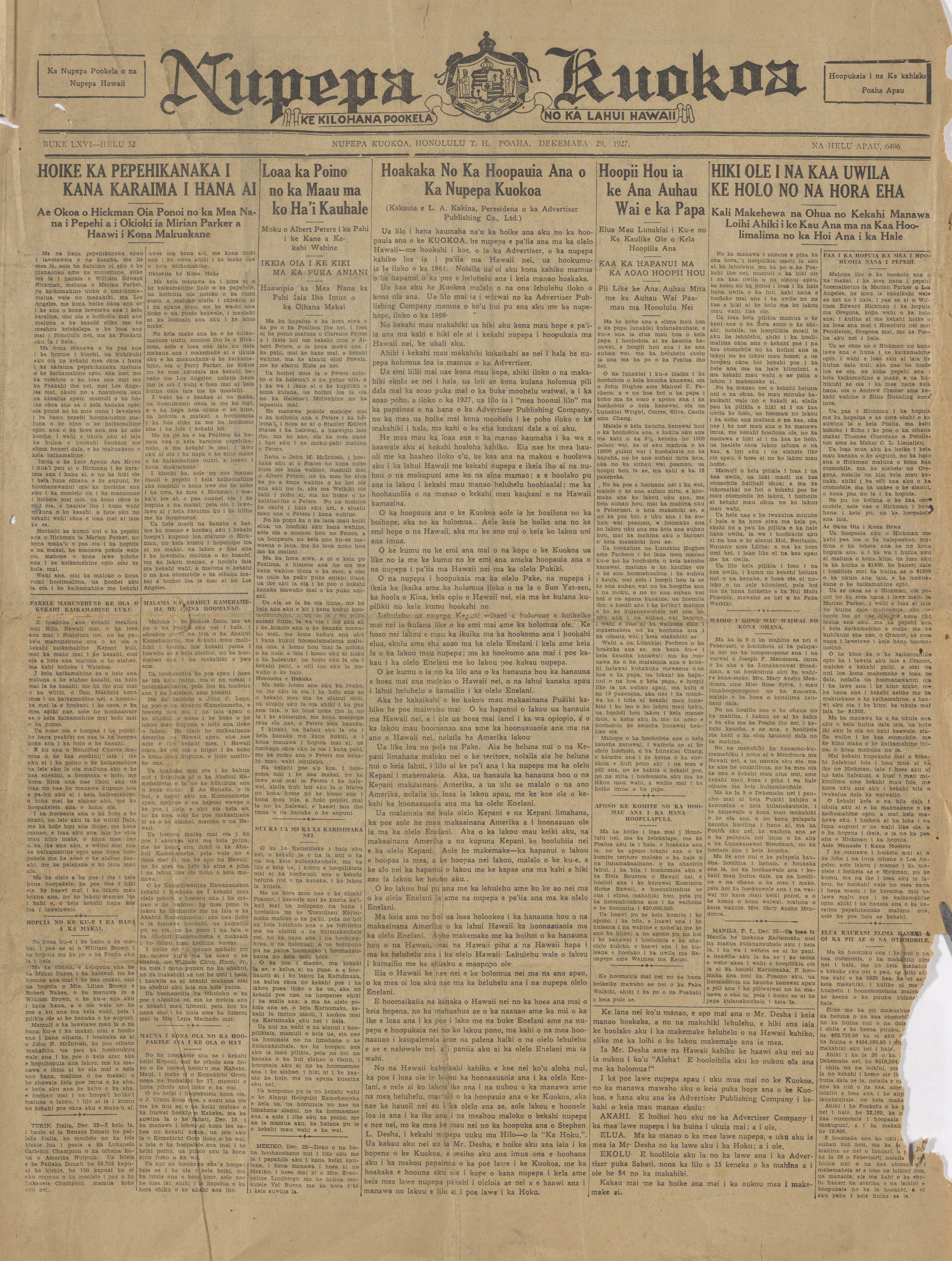