Twice a year, in May and July, the Sun passes directly overhead in Hawaiʻi. On these two days, around local noon, the Sun will be exactly overhead, at a 90o angle, and an upright object such as a flagpole will have no shadow. This phenomenon only occurs in the tropics; the Sun is never directly overhead on any other part of the planet. Hawaiʻi is the only U.S. state in the tropics and thus the only state where this occurs. In 1990 Bishop Museum held a contest to give a name to this phenomenon. The winner was “lāhainā noon.” 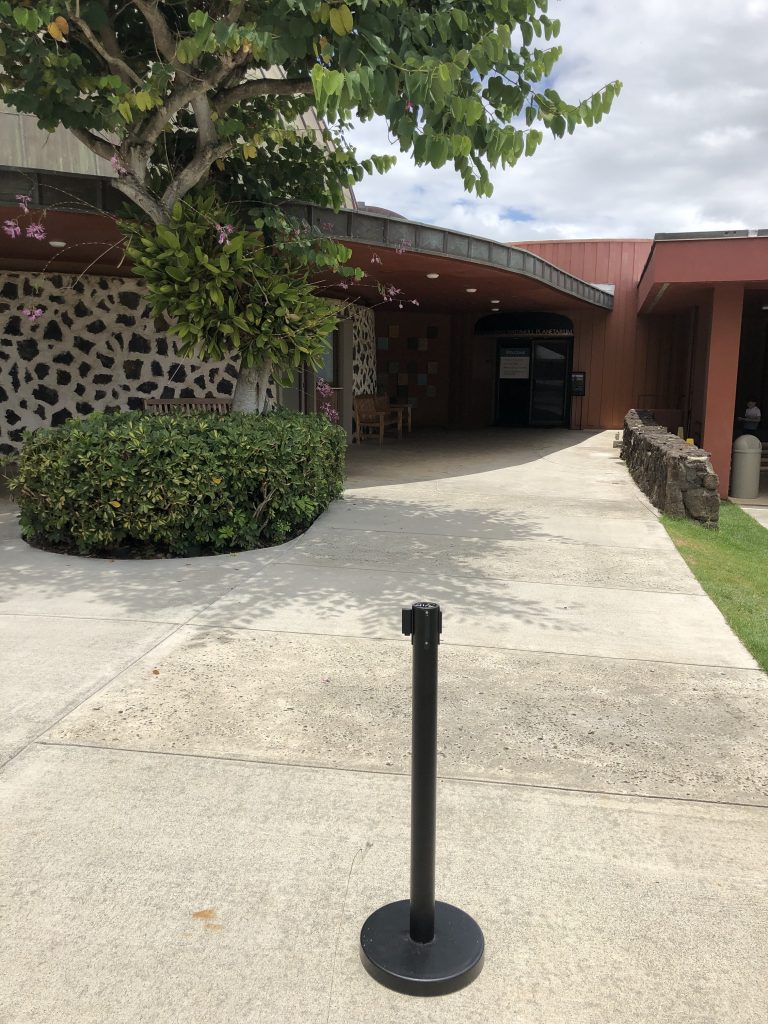 This image was taken during lāhainā noon. The pole has no shadow and the tree and building in the background show their shadows directly below them. During lāhainā noon the Sun is exactly 90 degrees overhead shining straight down.

The word lāhainā may be translated into English as “cruel sun,” but effectively makes reference to severe droughts experienced in that part of the island of Maui.

While the contemporary term lāhainā noon is often used today, an older term in ʻŌlelo Hawaiʻi (Hawaiian language) for this observable phenomena is kau ka lā i ka lolo, which can be understood to mean “the sun rests upon the brain.” The phrase, “kau ka lā i ka lolo, a hoʻi ke aka i ke kino,” also makes reference not only to this special time, but the cultural significance of its observance.

Mary Kawena Pukui (1979) relates in the book “Nānā I Ke Kumu, Volume 1,” that the phrase references high noon, when the sun is directly overhead and the shadow (aka) retreats into the body. In Hawaiʻi and in other parts of the Pacific, the poʻo (head) is a sacred part of the body, and actions or rituals involving the head are very significant.

The term aka is also described in “Nānā I Ke Kumu, Volume 1,” as the essence or spiritual form of many things, particularly food offerings intended for deities. The aka as shadow is also understood to have a close connection to a living person’s spirit. For example, an aliʻi kapu (sacred chief of high rank) would avoid letting his or her shadow fall upon someone of lesser status, and vice versa, because such an interaction would have a negative impact on the mana each held respectively.

During this special time of the day, certain rituals might be planned and conducted, as high noon “was thought of as a time of great mana (spiritual power),” according to Pukui. Offerings and prayers to ancestral deities or the administration of lāʻau lapaʻau (traditional medicine) might be done to maximize their delivery.

While the term tropical is often used to describe a location with sunshine, warm weather, and palm trees, there is a technical definition as well. It has to do with latitude, the measure of north and south on Earth. The Equator is the imaginary line around the middle of Earth at 0o latitude, neither north nor south. The North Pole is 90o north and the South Pole is 90o south. The tropics is the region of the Earth between the lines of latitude at 23.5o north of the Equator (the Tropic of Cancer) and 23.5o south of the Equator (the Tropic of Capricorn).

These two latitudes are noteworthy because they mark the northern and southern range of where the Sun shines down on Earth from directly overhead at least once during the year. The location where the Sun is directly overhead is also known as the sub-solar point. Any upright object like a flagpole won’t cast a shadow at all and a person standing outside will have their shadow directly under them. The sub-solar point moves north and south through the tropics throughout the year. Let’s walk through one year to visualize this.

23.5o is also the tilt of Earth’s axis. It’s not a coincidence that the angle of Earth’s tilted axis is the same as the latitude of the Tropics of Cancer and Capricorn. Picture the solar system in your head like looking at the edge of a dinner plate. The Sun is in the middle, and the planets appear on the left and right side. The plate is flat; this is the plane of the solar system. Straight up is 90o. Now if we picture Earth, it’s moving around the Sun, but it’s also spinning around like a basketball spinning on a finger. The imaginary line from the tip of your finger through the basketball is its axis of rotation, what it’s spinning around. Unlike the basketball, the Earth is not spinning around an axis straight up and down, its axis is tilted to the side, 23.5o. This tilt points the North Pole of Earth right at the North Star, Polaris. The North Pole is always pointing to that spot in space no matter where it is in its orbit around the sun.

This tilt is why we have seasons and why the sub-solar point moves north and south through the year. As Earth moves through its orbit around the Sun, the North Pole is still always pointed at the North Star, but this means that on the solstice in June when the Sun is directly overhead at the Tropic of Capricorn (23.5o north), the North Pole is tilted toward the Sun, the Northern Hemisphere experiences Summer, and it’s warmer because we get more direct sunlight. At the same time, the Southern Hemisphere is tilted away from the Sun, experiencing Winter and cooler weather because of less direct sunlight. The opposite is true six months later in December. At the Equinoxes in March and September, the North Pole is still pointing at the North Star, but neither toward nor away from the Sun which is directly overhead at the Equator.

In Honolulu, the Sky Gate sculpture near Honolulu Hale is a large curvy ring held up by four angled supports. Most of the year it casts an odd shadow of a curvy line on the ground outside the ring itself. During lāhainā noon though, with the sun directly overhead it casts a shadow directly below it of a perfect ring around the raised platform on the ground in the middle. Check it out around 12:30 p.m. in late May or mid-July. The J. Watumull Planetarium at Bishop Museum posts the dates for lāhainā noon  on our Astronomy Resources page www.bishopmuseum.org/astronomy-resources.