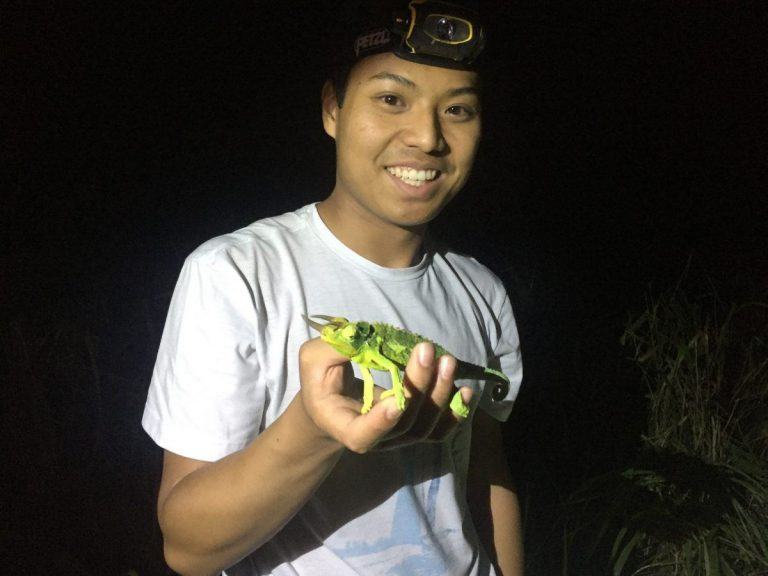 Michael Gloriani, a senior undergraduate Biology student at the University of San Diego, visited the Vertebrate Zoology collection to measure some of our chameleon specimens for his research.  He is studying Jackson’s chameleons (Trioceros jacksonii), which are not native to Hawaii and were intentionally introduced to Kaneohe in 1972.  Many thanks to Michael for agreeing to answer some questions so that we could learn more about his project!

Can you briefly describe the project you’re working on to earn your degree?

I am studying the sexual dimorphism of tongue projection in chameleons. This is my senior thesis project and it grew out of a project a friend of mine did in my advisor’s comparative anatomy class. She found that female veiled chameleons have a comparatively longer hyoid than males. The hyoid is the bone that supports the tongue. Chameleons can feed by shooting out their tongue; muscles squeeze around the long hyoid bone causing the mass of the tongue to shoot out. So I hypothesized that animals with longer hyoids should be better at shooting out their tongues. When we looked in the literature, that’s indeed what we found. But then the question arose, why would males and females have different feeding capabilities? That’s when we decided to study the population of Jackson’s chameleons on Oahu because we can see what they do in nature. For example, do they divide their resources with females eating faster insects than males?

Why was it important to use Bishop Museum specimens for this project?

The Bishop Museum was one of our first stops for this project. We had to look at a large number of specimens to verify that in this species there is a similar pattern of sexual dimorphism. So we looked at all chameleons from Oahu and measured the length of their hyoid and their total body length. We also looked at specimens from other islands, as well. Without this large number of specimens we would not be able to move onto the next part of the project, which is to film the animals and correlate tongue projection with hyoid length.

What kinds of measurements/samples did you take and how many different species did you examine?

I looked at over 100 specimens of the same species (Trioceros jacksonii) from three islands, and measured snout-vent length, as well as the the hyoid.

How will this research further conservation efforts in Hawaii?

Chameleons were introduced to Hawaii in the 1970’s. They are voracious predators and feed on several endangered Hawaiian invertebrates, such as snails and damselflies. By better understanding how they feed in nature we may be able to design better control strategies for protecting the native fauna.

How did you enjoy your time in Hawaii?

As a biologist coming to Hawaii was a big deal. I was excited to see the diversity of animals that are found only here!