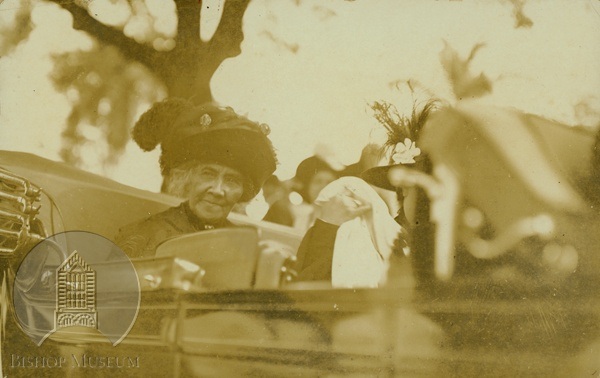 “Kamakaʻeha (the sore eyes), Liliʻu (the smarting), and Loloku (the pouring tears) were names given to Queen Liliʻuokalani. Kīnaʻu, daughter of Kamehameha I, was once troubled with sore eyes, and her physician kept her in a dark room until she became well again. Two royal children were named for this event. The son of Piʻikoi was named Kahalepouli, or “darkhouse”, for the dark room Kīnaʻu was confined in. With Kinoiki, the sister of Queen Kapiʻolani, he later became the father of David Kawānanakoa, Edward Keliʻiahonui, and Jonah Kūhiō Kalanianaʻole. Liliʻu was named for the pain, the smarting, and the tearfulness of the eyes of Kīnaʻu. Liliʻu was the daughter of Kapaʻakea and Keohokālole.”

In celebration of her birthday, we feature a mele inoa composed for the last ruling monarch of the Kingdom of Hawaiʻi.

ʻO ka maka ia i hea ʻia, i kapa ʻia ai … Those were the eyes for whom you were named

ʻO nā maka o Kalaninui kaikuaʻana … Named are you for the eyes of the high chiefess, the older sister

Hoʻokuʻi nā hono i mākaha … The group of islands seen together

Waiho ihola i ka loko … As though encircling a pond

He loko Lāhainā ē, He loko puaia ia na ka makani … A pond is Lāhainā blown gently by the wind

He kō pona hala … A sugar cane with well-formed sections

I Waipuhia ka wai he waimaka no ka pua … At Waipuhia is found the water, like teardrops of the flowers

Ua ʻula wale, ua lei wale nā wahine a ʻohu … Red are they and worn to bedeck the women

Alanui ʻula i ka ua a ka Waʻahila … Reddened is the trail in the Waʻahila rain.