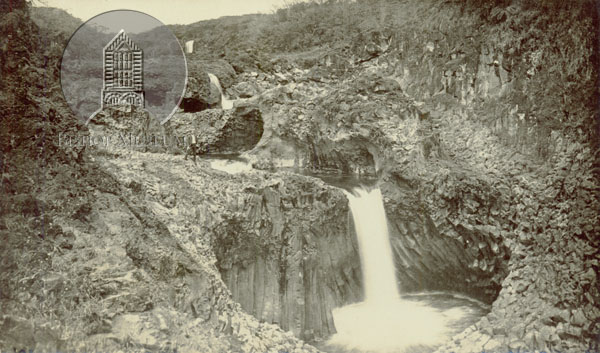 “This was the call of Pili a Mo‘o, the smaller of the two mo‘o who kept the ʻtipsy plank of the Wailuku’ at the ford just above the falls of Pāhe‘ehe‘e and Kaluakanaka (‘Make Fall’) near the mouth of the river, and exacted toll for passing over. This mo‘o stayed under a big rock near the top of the bank just to the left of the old trail down to the river. Noho a Mo‘o, who kept the pass on the Hāmākua side and who was larger than his companion, lived in a cavern in the bank over which the falls drop, and to the left of them. Noho a Mo‘o had the same call as Pili a Mo‘o, except that he called for fish “Hō mai ana he i‘a.” The mo‘o were killed by Hi‘iaka. The ʻtipsy plank’ was kept in a little cave near the falls on the Hāmākua side, or in wet weather in a little cave up on the side of the bank a little farther up stream.”- Excerpt by Mrs. Porter, the oldest living kamaʻāina in Wailuku at the time.