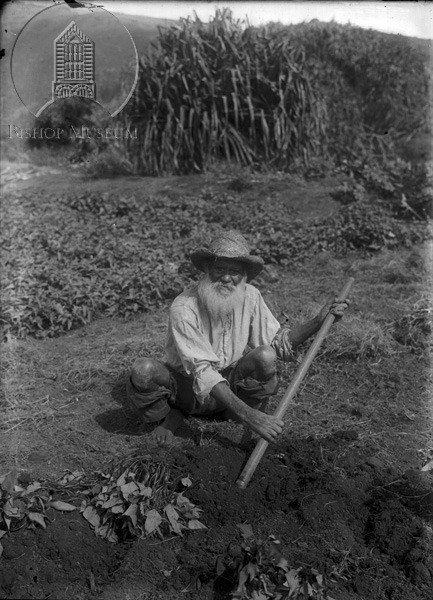 A play on ho‘olewa (to lift) and kū hele mai (stand up and come), meaning that we stood up and lifted the beer down our throats. An expression used by the sweet potato beer drinkers of Lahaina, Maui.
Selection no. 1181 from Mary Kawena Pukui’s “ʻŌlelo Noʻeau: Hawaiian Proverbs & Poetical Sayings,” ©1983 by Bishop Museum.

‘Uala ‘awa‘awa, or sweet potato beer, was prepared by cooking, peeling, and mashing sweet potatoes. Mixing the mashed sweet potato with water, it was then left in a jar or barrel for a few days until the process of fermentation was complete.

Referred to in this mele as “the liquid that makes the body limp,” the composer begins by describing the various sensations of consuming ‘uala ‘awa‘awa and the relaxing effects it has on the body.

Ke pola ʻuwala piʻi i ka lani.
For the bowl of sweet potato (brew) raised to the sky.

Me ka wai haʻi malule i ke kino.
Is the liquid that makes the body limp.

Noho maila i ka pākipa,
There sits the barkeeper,

ʻO ke kau a ka lā a i nā pali,
The sun now rests over the cliffs,

Ke pola ʻuwala piʻi i ka lani.
Of the bowl of potato brew raised to the sky.