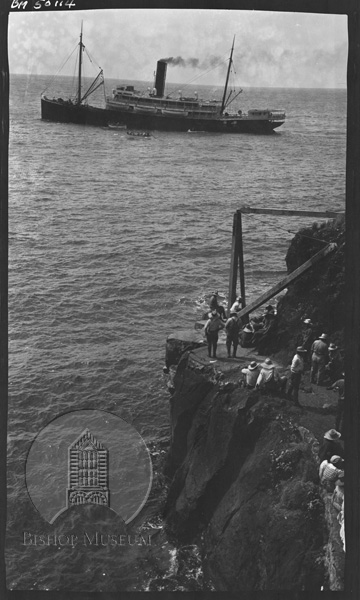 “On June 28, 1860, the Kilauea, a screw steamer of 414 tons built for the [Hawaiian Steam Navigation Company] in East Boston, arrived at Honolulu and soon afterward began her long and varied career in the interisland service. With the advent of this vessel, steam navigation became a permanent but not uninterrupted feature of community life in the Hawaiian kingdom. The Kilauea, which remained in service for seventeen years (with some gaps), represented the farthest advance in local transportation that was possible under the pre-reciprocity economy.” – The Hawaiian Kingdom: Vol. 2: Twenty Critical Years, 1854-1874. University of Hawaiʻi Press, 1953.

Yesterday marked the 160th anniversary since the Kīlauea first arrived in Hawaiʻi. Today’s featured mele was composed in honor of this extraordinary vessel.

Nāna i kaiue ka moana,
She plied the ocean dup,